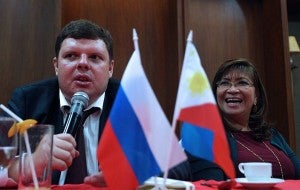 While maintaining its loyal East Asian market, Cebu’s tourism officials will want to tap into new countries and bring them to Cebu.

Among their targets include Indians and Russians.

GMR-Megawide Cebu Airport Corp. (GMCAC) officials are expecting travel agents from India to come and visit Cebu by next month.

“A group of travel agents from Western India, including Mumbai, are flying over in January. They’re going to Cebu and feel the warmth of Cebuanos, go to the attractions. They’re looking forward,” said Aines Librodo, head for airlines marketing and tourism development of the GMCAC.

Last August, officials of the GMCAC and the Department of Tourism in Central Visayas (DOT-7) visited five cities in India for six days in order to promote Cebu as a destination.

Admittedly though, they said that Cebu is not yet very known among Indian nationals.

It was during this visit that they were able to present the different popular tourist destinations in Cebu and the rest of the region.

Librodo said they saw how the travel agents found these destinations beautiful and worth visiting.

“We believe India is the next best market we can get together with China. Next year, we included India as one of our target markets. We’re going to India again and we will be focusing on one or two cities at a time,” she added.

GMCAC Chief Executive Advisor Andrew Harrison added that one of the concerns of the travel agents in India was the need to connect with local tour operators and agents in Cebu in order to craft proper tours for Indian nationals.

Based on records from the DOT-7, India is still not part of the top ten tourist markets for Central Visayas in 2017.

Korea remains to be the top tourist market.

On the other hand, China has overtaken Japan for the second spot while Japan settled for third.

Other countries in the top ten include USA, Taiwan, Australia, Germany, France, United Kingdom, and Canada.

DOT-7 Regional Director Shalimar Tamano said he also believed in the potential of the Indian market for tourism.

“We are campaigning for India. We’re focusing on India and their wedding market,” he said.

According to Tamano, Indian nationals would tend to spend a lot for their wedding ceremonies.

He said they would usually spend one whole week abroad and in popular tourist sites for their wedding ceremonies.

These couples also bring their whole families during their wedding vacations.

Tamano added that since GMR is an Indian company, there would be an advantage in bringing this tourist market to Cebu and the rest of the region.

Aside from Indians, other stakeholders are also looking at new markets like Russia.

The Russian Consulate in the Philippines is also eyeing partnerships with local travel and tour agents and agencies in developing tours that will be good for Russian nationals.

Armi Garcia, honorary consul of Russia, said they would want to promote Cebu as a retirement area for Russians.

At the same time, they also would want to bring more Cebuanos and Filipinos to Russia to experience the country’s own destinations.

For millennials, Garcia said they would want to promote the far eastern side of Russia to experience the country’s Winter season.

Among the popular activities there during Winter are snow fishing, skiing, and riding sleds.

“As a retirement destination, one of the requirements is they need medical facilities. It’s very promising. Cebu is very promising, though we have a very problematic traffic, but still, compared to Manila, (in Cebu) it’s not far for them to go to the beach. Russians love the beach,” Garcia said.

She said that they had been working closely with the DOT in doing forums to promote both Cebu and Russia to tourists for both countries.

Currently, there are still no direct flights from Cebu to any part of Russia.

But if they would be able to create traffic among tourists for both countries, Garcia said airlines would eventually consider opening new routes to these two countries.