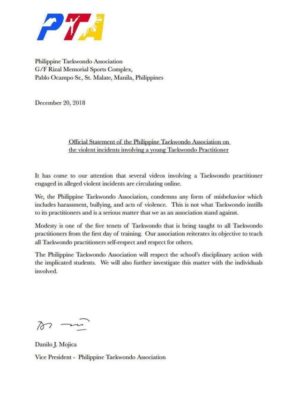 CEBU CITY, Philippines – The Philippine Taekwondo Association (PTA) on Thursday night released a statement about the viral video of a practitioner from a prominent university in Manila seen inflicting harm on other students.

The video has been circulating around social media since Thursday morning.

Here is the statement from the PTA:

“It has come to our attention that several videos involving a Taekwondo practitioner engaged in alleged violent incidents are circulating online.

We, the Philippine Taekwondo Association, condemns (sic) any form of misbehavior which includes harassment, bullying, and acts of violence. This is not what Taekwondo instills to its practitioners and is a serious matter that we as an association stand against.

The Philippine Taekwondo Association will respect the school’s disciplinary action with the implicated students. We will also further investigate this matter with the individuals involved.”

The statement, which was posted on PTA’s Facebook page, was signed by Danilo J. Mojica, the Vice President of the PTA.

Read Next
Cebuano coaches speak out: Combat sports only for self defense, not for bullying