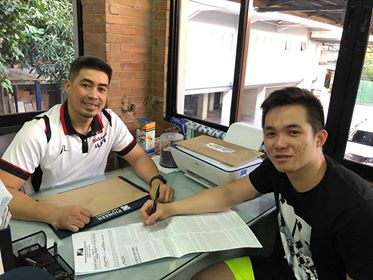 Cebuano wingman Paul Desiderio has been inked to a three-year max contract by the Blackwater Elite.

The contract has been a long time coming for the pride of Liloan who was drafted 12 days ago by the NLEX Road Warriors but was traded to Blackwater along with fellow draft pick Abu Tratter for big man, Poy Erram.

Blackwater team manager and Cebuano hoops legend Joel Co said that he and the rest of the team could finally breathe a sigh of relief after locking up both Desiderio and Tratter to contracts.

“Actually, we are excited kasi everybody’s been signed up before the year ends. At least, for Paul, he could now focus on the job at hand. Yung nararamdaman sigurado super saya dahil part na sila ng family ng Blackwater,” said Co.

Desiderio, a former MVP of the Cesafi juniors tournament back in 2011 while playing for the University of the Visayas, rose to prominence over the past two seasons of the UAAP as he led the upstart University of the Philippines Fighting Maroons to the finals for the first time in 32 years.

The 6-foot guard made it to the Mythical Five of the UAAP last year and then, hit one big shot after another in the Maroons’ much-celebrated run to the finals this year.

Read Next
OFFICIAL STATEMENT of PNP Chief Oscar Albayalde on cancellation of permit to carry firearms of Mayor Orcar Garin and his son Rep. Richard Garin