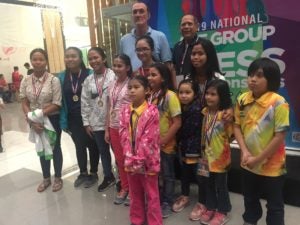 Cebu City, Philippines – Nineteen Cebuano pawnpushers made it to the national finals after placing in the top 3 of their respective categories in the  National Age Group Chess Championships Visayas leg, which came to an end Saturday night, January 5, at the SM Seaside City Cebu.

Leading the Cebuanos into the finals were those who clinched the titles in their categories. They were Renzi Kyle Sevillano (Under 20 Boys), Jerish John Velarde (U14 Boys), and Vic Glysen Derotas (U18 Girls).

These Visayas leg finalists will be pitted against the finalists from the Luzon and Mindanao legs.

Should they win in the finals, these Cebuano pawnpushers will represent the Philippines in international competitions.

Aside from qualifying to the finals, the top 3 finishers also received cash prizes with the champions pocketing P3,000, the first runner-up P2,000 and the second runner-up P1,500.

The national finals will be held sometime this summer after the eliminations in Luzon and Mindanao are completed. /bjo