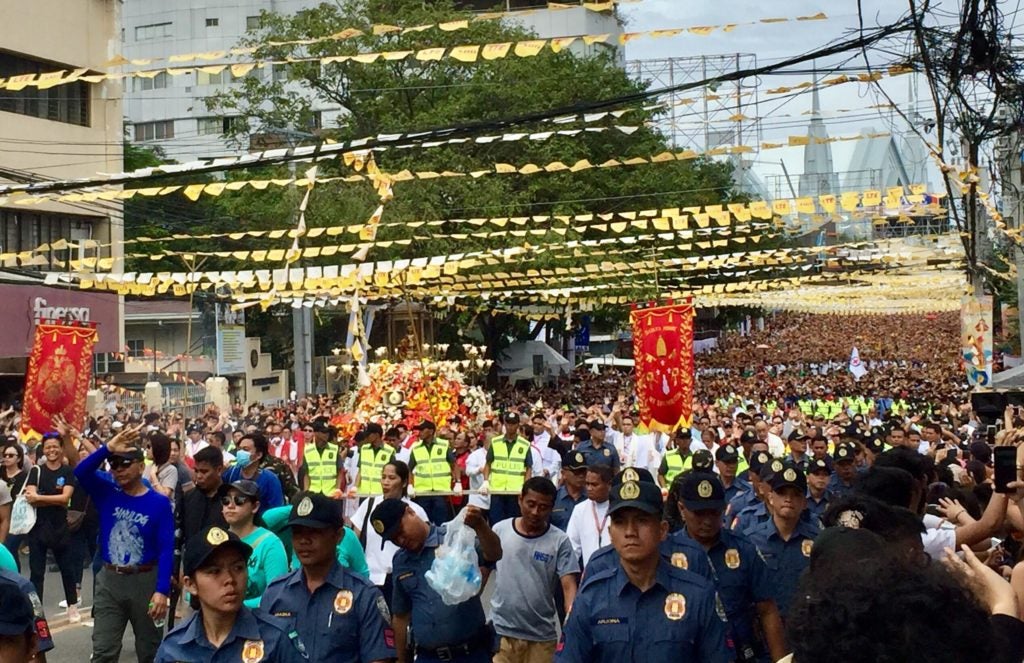 Police officers make sure that the solemn foot procession on Saturday is orderly and peaceful.|CDN Digital photo by Tonee Despojo

CEBU CITY, Philippines — The Cebu City government should address the issue of garbage collection for the Sinulog activities because this could be a possible security threat to the public.

Senior Superintendent Royina Garma, Cebu City Police Office director, made this appeal to the Cebu City government on Saturday, January 19, after she noticed uncollected garbage along the routes of several Fiesta Señor activities.

She said that uncollected garbage could be used by criminals to hide improvised explosives that might not be detected by the Explosives Detection Dogs (EDDs) because the smell from the garbage might confuse the canines.

She said that the police personnel deployed to the area had to clear these uncollected trash merely hours before the religious processions.

Meanwhile, Garma said that the religious activities for the Sinulog had been generally peaceful, and no untoward incident related to the activities happened from January 10 to January 19.

She said that the success of the security could be attributed to the cooperation of all agencies working together to keep the Basilica Minore del Sto. Niño safe.

Garma said that the proper implementation of the security plans also played a part in the faster movement of the religious processions averaging at least 30 minutes earlier compared to the past year.

Garma said he was hoping that the safety streak would be kept with the holding of the Sinulog Grand Parade on Sunday, January 20.

She also called on the public to continue following the rules such as the no backpack policy for an orderly yet enjoyable Sinulog./dbs