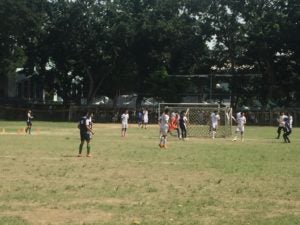 DBTC was able to compensate for the loss with its G3A team taking the Under 9 title via a 1-0 win against a sister team, G2-A.

Close to 100 teams joined the festival, which made a return after a four-year hiatus.

DBTC head coach Glen Ramos said that he decided to bring back the Founder’s Day Football Festival as the DBTC-based clubs are growing and so aside from the weekend trainings they will also have something to look forward to.

Ramos added that they will be holding another football festival in the upcoming summer.

The Women’s Open and 40 Above categories will be played tomorrow, January 27.

Aside from DBTC teams and USJ-R, also seeing action are Sisters of Mary Schools Boystown, KNF of Consolacion and Guardian Strikers of Talisay and Sacred Heart School-Ateneo de Cebu of Mandaue. /bjo