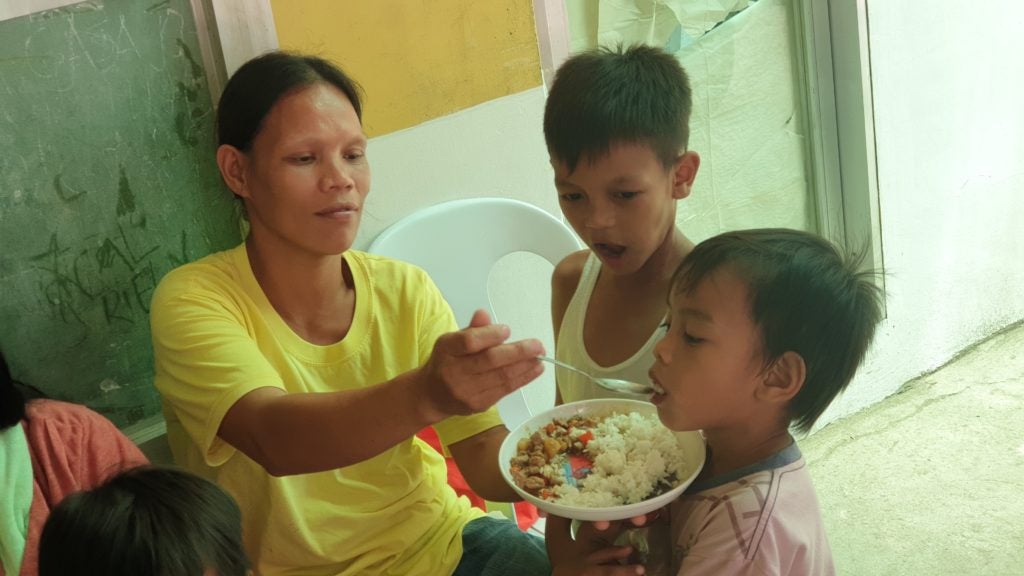 CEBU CITY, Philippines – It was painful for 32-years-old Judith Anor to find that her children were short and underweight for their ages, but with only her husband’s income as a construction worker to depend on, making both ends meet was tough.

They mostly live on rice, salt, vegetables, and dried fish to cut down on their food expenses. But that was not also enough to meet their three meals per day requirement.

The worst happened when Anor’s husband got sick and she had nothing left to feed her five young children for a week. Her children had to stop studying then and instead joined her in looking for work so they could have something to eat and spend for their father’s medication.

“I had to go to school and explain our situation so it wouldn’t affect my children’s grades. We had nothing to eat and we all lost weight. At that time, I really felt I may have failed my children as a parent,” Anor said.

According to the Philippines’ Food and Nutrition Research Institute, there were roughly 3.78 million Filipino children under five-years-old who suffered from stunting in 2015. Most of these children belonged to the poorest of the population and families affected by food insecurity, poor feeding practices, and inadequate health services.

In Barangay Sapangdaku, Cebu City, where Anor resides, more than 40 of the 957 children under five years old were either wasted or stunted.

To address this concern, the Philippine Business for Social Progress (PBSP) and the Cebu Centennial Lions’ Club (CCLC) organized a supplemental feeding program that aims to improve the nutritional status of Filipino children under five years old. The project supported 20 children from Barangay Sapangdaku who are below the ideal weight for their ages. They received supplementary dietary support for a period of 120 days.

Aside from the supplemental feeding, the project also educated households, particularly mothers, on basic nutrition and food preparation, healthy eating habits among children, and on how to sustain their own source of nutritious food through Food Always In the Home (FAITH) gardening.

Because of the 120-day feeding, one of Anor’s children now has an improved nutritional status. Anor also learned how to prepare healthier meals made from vegetables that she would take from the garden which PBSP and CCLC provided.

“I feel better and happier now. I can finally feed my family with healthier meals but with lesser expenses because I now have my own vegetables in my own garden,” Anor added.

The supplemental feeding project is a component of PBSP’s flagship program for health, where the organization hopes to contribute to the reduction of stunted and wasted children aged 24 to 59 months old due to lack of nutrition, from 33.4 percent to only 21.4 percent.

The program is also aligned to the Philippine Plan of Action for Nutrition from 2017 to 2022, which focuses on addressing persistent malnutrition concerns in the country and is anchored in the 2030 Sustainable Development Goals for promoting Maternal, Infant and Young Child Nutrition.

As of 2018, PBSP was able to nourish 80 children in Cebu City in Cebu province and Bago City in Negros Occidental. /dcb

Read Next
BDO to implement next phase of systems upgrade