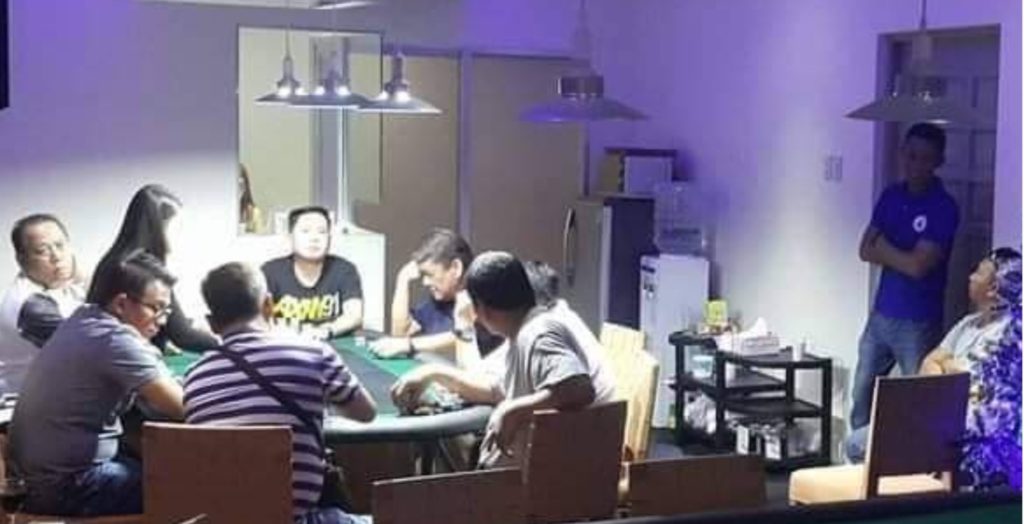 A photo of a group of men engaged in an illegal gambling activity, which reportedly includes Cebu City Mayor Tomas Osmeña, is circulating online. The “Pulihi Na, Cebu!” movement released a statement on Sunday, May 5, urging the public to vote for officials with  “good image.”

This is the core message that the “Pulihi Na, Cebu!” Movement shared in a press statement released on Sunday, May 5, 2019.

The press statement followed after a photo of a group of men allegedly engaged in an illegal gambling activity circulated online.

The photo had seven men and a long-haired woman surrounding a rectangular-shaped table. The woman was standing across a man, who was seated with his right fist on his forehead.

The man is believed to be Osmeña.

Two other men can be seen in the photo, who appeared to be observers or aides.

CDN Digital was able to obtain copies of the photograph from a complaint filed by a certain Conrado Romano before the Office of the Ombudsman in the Visayas.

In his letter to the Ombudsman dated April 30, 2019, Romano said that he witnessed Osmeña engaged in illegal gambling activities in three instances on January 2019 at the House of Jacks in Ralph’s Wines and Spirits.

Romano, in his letter, said that he previously read from newspapers that Philippine National Police operatives from Central Visayas raided an illegal gambling joint which bears the name  “House of Jacks.”

House of Jacks is located within Ralph’s Wines and Spirits, a liquor store which is located behind a hotel in Barangay Kamputhaw, Cebu City.

Romano then said that he was able to take photographs of Osmeña inside the store.

“The photograph I took while Mayor Tomas Osmeña was playing was done in the first week of January where [sic] I was invited by a friend to accompany him in the place and to my surprised [sic], I saw the father of the city who was gambling,” part of Romano’s letter reads.

Romano said he was disappointed by what he saw.

He believed that Osmeña’s actions violate Presidential  Decree 1602, Grave Misconduct, Conduct Unbecoming of a Public Official and Neglect of Duty.

In his official Facebook page, Vice Mayor Edgardo Labella also gave a piece of his mind regarding the complaint photo.

“But it’s not me, Mr. Osmeña. Like in your previous baseless accusations against me, I have no hand on this one. It’s Your hands, not mine, caressing the poker chips and cards.

Labella wrote that Osmeña seemed to have forgotten President Rodrigo Duterte’s directive, which mandated public officials from going into gambling establishments, especially those without license from the Philippine Amusement and Gaming Corporation (PAGCOR).

Labella’s post insinuated that Osmeña’s favorite poker place does not have a PAGCOR license. /

Meanwhile, the organizers condemned the illegal activities allegedly done by Osmeña as suggested in the photo.

“Is this the image of a good public official? So, is this where our taxes go?” the statement read.

The statement also lauded Conrado Romano, who filed the complaint against Osmeña.

The group further noted that Osmeña was tagged as “protector” of illegal butane businesses in the city last month.

“This makes our movement stronger not just in words but with the evidence that proved Cebu deserves better,” the organizers said. / celr

Read Next
Chan, Radaza accuse each other of harassment