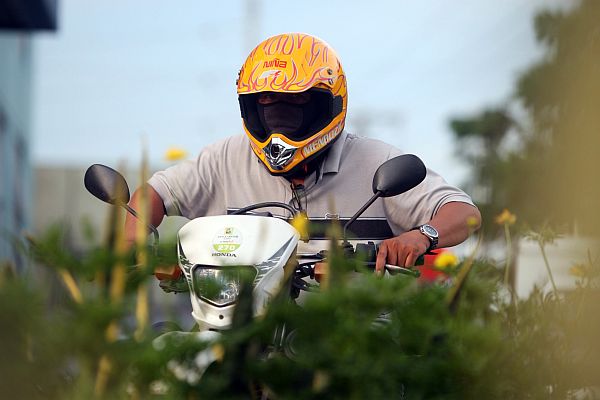 The use of full face helmets is prohibited in Mandaue City./CDN File Photo

Mayor-elect Jonas Cortes said that he plans to have the ordinance repealed when he formally assumes office on June 30, saying that its implementation is not the solution to the city’s peace and order concerns, aside from its being anti-poor.

(I will try my best to have that ordinance (repealed). I myself am a motorist and for me that legislation is anti-poor.)

Cortes said he recognizes that most of the city residents are poor, who do not own cars and could not even afford to pay for Grab and taxi rides. Most, he said, patronize the cheaper motorcycles-for-hire and Angkas rides.

But the city’s helmet ordinance passed in November 2017 and implemented by the Traffic Enforcement Agency of Mandaue (TEAM) prohibits motorcycle drivers, passengers and even tricycle drivers from wearing full faced helmets and face masks. Violators risk payment of fines amounting to P5,000.

Cortes said that prohibiting motorcycle riders from covering their faces during the duration of their travel could result to health risks.

(Our roads are now very dusty. We will only compromise the health of motorist because of our desire to lessen the occurrence of crimes perpetrated by motorcycle tandem.)

Cortes said that the prohibition on the use of face covers could have been justified if the ordinance helped reduced criminality in the city, but it did not.

“Pero nangutana ko, so far, since that ordinance was implemented, wala man gyud intawn manaug ang atong crime rate because of riding in tandem. So, in other words dili effective sa iyang katuyoan,” he said.

(I made my inquiries and I found out that since the ordinance was implement, we never saw a reduction in crimes perpetrated by motorcycle tandem. So, in other words, the ordinance failed to serve its purpose.)

Law enforcement, Cortes said, is also something that should be left for the police to do.

(Law enforcement is not a job of traffic enforcers. This is something that should be left for the police to do and I believe that the best solution to criminality is police visibility. The police should be out on the streets, in major intersections and equipped with communication gadgets.)

The police, he said,  can tap the assistance of multiplier forces like the barangay tanods and members of the Barangay Intelligence Networks (BIN).

Cortes said the police could also tap the help of some of City Hall’s Job Order workers like those assigned as eco-wardens to help provide deterrence to criminality.

He said it is a reality that the current police force will never be enough for the city to achieve the ideal ratio of 1 policeman per 500 city residents.  This is also a reality in other parts of the country, thus the need to come up with “out of the box” solutions to the city’s peace and order concerns.