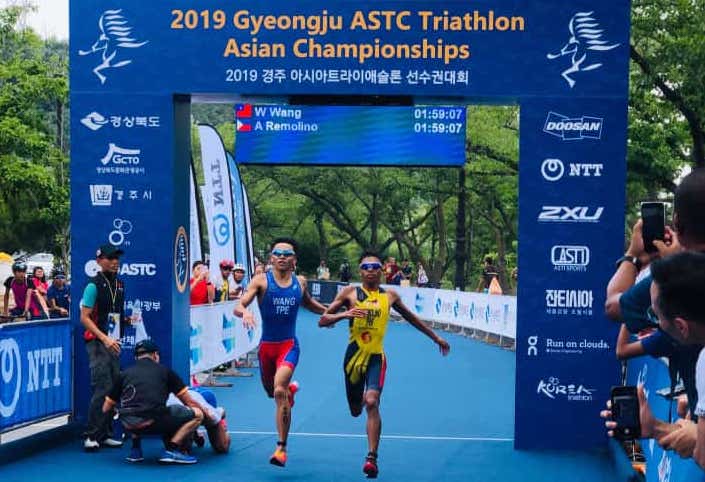 CEBU CITY, Philippines—Andrew Kim Remolino, the pride of the City of Talisay, Cebu, may have just sealed his slot in representing the Philippines in the triathlon competition of the 2019 Southeast Asian (SEA) Games.

This, after the 19-year-old member of the Talisay Luigi Triathlon Group – Go For Gold (TLTG-GFG), emerged the first Filipino elite to cross the finish line in the 2019 Gyeongju ASTC Asian Triathlon Championships, held in South Korea, Friday, June 21, 2019.

“It’s very fulfilling because of these results, I can say that we are already getting closer to our dreams and goals,” Remolino told Cebu Daily News Digital.

Remolino crossed the finish line with a time of one hour, 59 minutes and seven seconds (1:59:07).

According to TLTG-GFG head coach Roland Remolino, Andrew Kim’s finish allowed him to book a slot in the SEA Games, which the Philippines will be hosting from November 30 to December 10, 2019.

He said either the top 2 or 4 Filipino triathletes in this tournament will get to represent the Philippines in the upcoming SEA Games.

The official Philippine lineup for triathlon, however, has yet to be announced. The Triathlon Association of the Philippines (TRAP) is tasked to make that announcement.

Andrew Kim got the top ranking in representing the Philippines when he was also the first Filipino elite to finish in the first SEA Games qualifier last April—the Subic Bay International Triathlon 2019 in Subic.

It was the first time that Remolino raced in the Open Elite category in the standard distance. /bmjo

Read Next
Labella taps five lawyers to join his administration