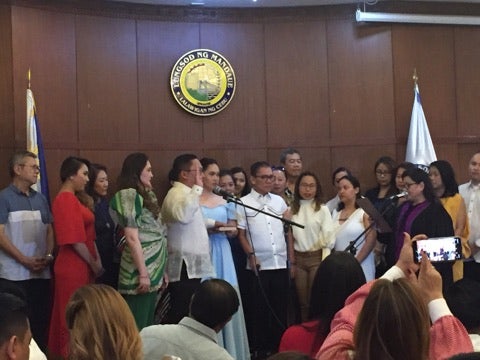 MANDUE CITY, Philippines – With their appointments already ending on June 30, Mayor Jonas Cortes is asking all Job Order (JO) employees of the Mandaue City Hall to already cease from reporting for work starting on Monday, July 1.

All those who wanted to seek reappointment should reapply for employment, he said in an interview this morning, June 28.

(For all the JOs, their appointments will already end on June 30. I am asking all of you to apply and we will assess you based on your individual performances.)

The Mandaue City Hall has more than 2, 000 JOs assigned to the different city government offices.

Cortes gave the assurance that they will consider all the applicants for employment irregardless of their party affiliation.

(If you would still recall, last, last year there were those who were terminated from service. They were replaced by the previous administration. Among them were employees who rendered more than 20 years of service to the city government. Remember that I served the city for nine years (before I was given a new term in the May 13 election), (the late mayor) Teddy (Ouano) served for nine years so that’s a total of 18 years. In other words, there were those who served way back the administration of Ingko Pedong (Ouano) but I never terminated their  services because I assess employees based on their performance.)

Cortes said that performing JOs will surely find employment at the Mandaue City Hall. Those who have no work performance to show do not have a place under his administration.

“If performing sila then atong dawaton,” he said.

(If they are performing then they will be rehired.)

Cortes cited the example of some traffic enforcers under the Traffic Enforcement Agency of Mandaue (TEAM) who already ceased from reporting for work even before they were told to do so.

(In fact, some traffic enforcers already ceased from reporting for work. You would no longer see them on the streets. They can no longer be found. So, this will be one of the basis for our evaluation.)

Cortes said that his transition team led by his City Administrator Atty. Jamaal James Calipayan is tasked to oversee the assessment of JO applicants and will soon be coming up with a list of those who qualified for reappointment.