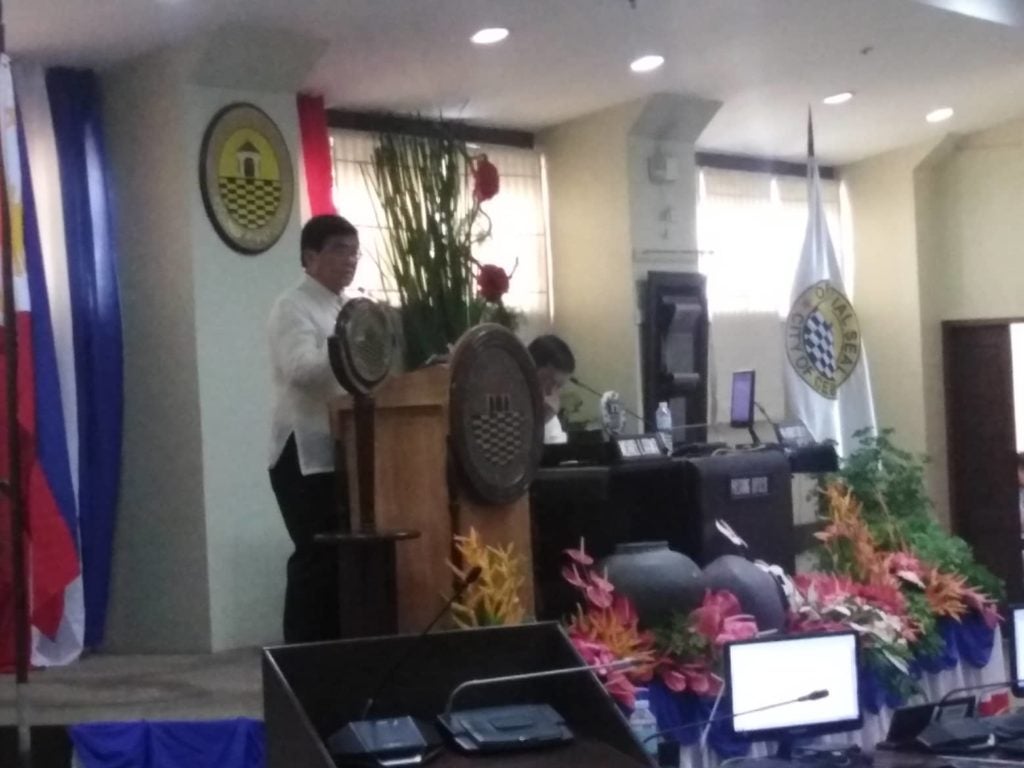 Cebu City Mayor Edgardo Labella addresses the Cebu City Council and urged them to help him achieve his goals for the city. | Delta Dyrecka Letigio

On Tuesday afternoon, July 2, the new mayor made his inaugural speech to the council and took it as an opportunity to share his 10-point goals for the city.

He encouraged the council to create legislations that would achieve these goals and create ordinances to provide better services to the public.

Top on Labella’s goals is to solve flooding.

He said that he will be working with the Department of Public Works and Highways (DPWH) and the neighboring cities of Mandaue and Talisay to work on dredging the waterways to prevent blockage of water in the city.

He said the water must be given tributaries to flow out of the lowlands.

The new mayor also sought the help of the City Council to create legislations that would make it easier for the business sector to get approval of permits in the city.

He urged the Office of the Building Official (OBO) to hold fast the timeline for 45 calendar days of processing of the building permits with complete and accurate requirements.

Labella also urged the council to allocate a specific budget for new traffic lights, a new digital traffic system and for the training of people to run this new system.

He said that Cebu City has been left out by its neighbors when it comes to a digital traffic system to manage the “worsening” traffic situation of the city.

The mayor asked for a supplemental budget to address the trash problem to buy more equipment for the collection of the garbage in the city.

For education, Labella is hoping to establish the Cebu City College within his term, and urged the councilors to create a legislation providing for free breakfast for all public school elementary pupils.

“Can we also give them uniforms including shoes, and free school supplies like notebooks and pens?” said Labella.

Labella is also seeking the Council’s help in improving the public safety and security in the city through a technologically-advanced alarm system to facilitate quick response from the police.

The mayor also plans to finish two of the long “overdue” projects of the city government including the Cebu City Medical Center and the Carbon Market Phase 2.

Lastly, Labella sought for the council’s help to pay for the debt the city acquired in the construction of the South Road Properties so the future of the city will finally be debt-free.

The administration councilors of Partido Barug-PDP Laban, the majority floor of the council, promised to bring these goals to fruition.

Majority floor leader, Councilor Raymond Garcia, said that with the council committees under the administration party, the mayor’s goals will be smooth sailing in the City Council.

Minority floor leader, Bando Osmeña-Pundok Kauswagan (BO-PK) Councilor Nestor Archival, also said that the goals of Labella are doable and they can help by authoring legislations that would be good for the public.

However, Archival said the minority bloc will remain vigilant to be the check and balance fort of the council. / celr