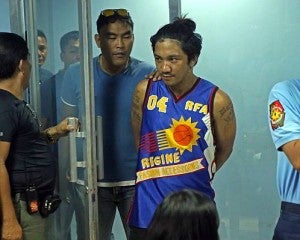 Jerome Gonzaga is escorted by a policeman to the Cebu City Police Office after he was arrested for his alleged involvement in the robbery of an LBC outlet in Tabo-an. (CDN PHOTO/ LITO TECSON)

The robbery of an LBC courier outlet in barangay Taboan, Cebu City is considered solved after a man suspected to be involved in the March 10 heist was arrested.

Barandog said Gonzaga was identified by an LBC staffer as one of the two robbers based on the  security camera footage which captured the robbery.

Barandog said an operation to arrest the other suspect identified as Bernabe Diamosburo is ongoing.

Police went to Diamosburo’s house in barangay Duljo-Fatima, Cebu City but he was not found there. Recovered in the house were a KG 9 pistol loaded with 24 bullets for a 9mm pistol, two .45 caliber pistols with 20 bullets.

Police said Diamosburo  was previously convicted for charges of illegal possession of firearms. He was also jailed in the past for illegal drug charges.

Based on the video footage, Gonzaga was the one who pointed a gun at a customer.