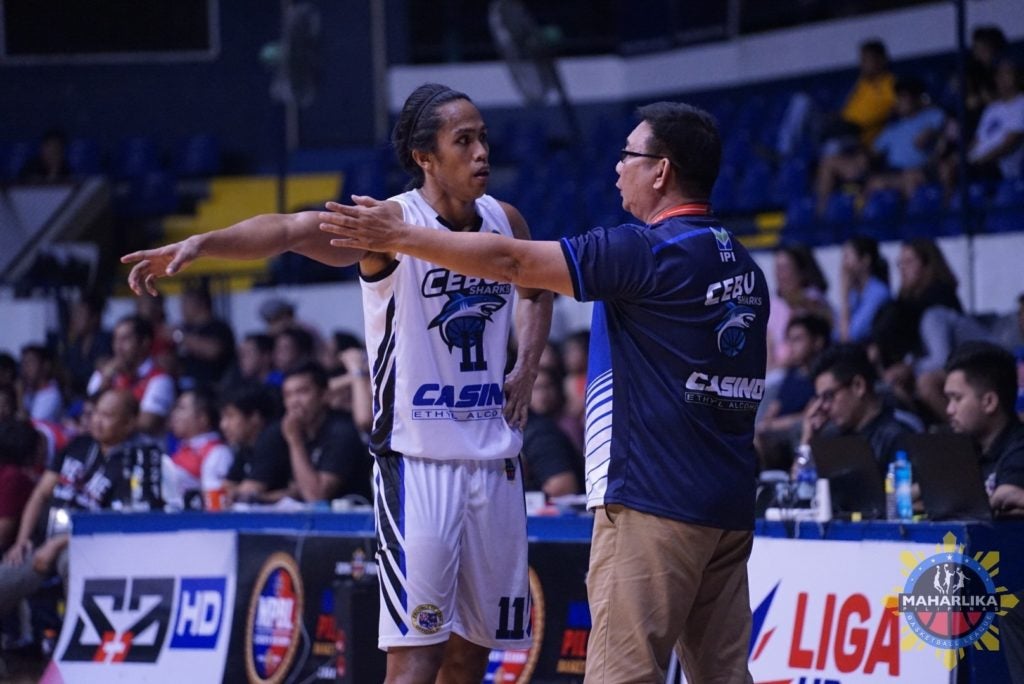 Cebu Sharks head coach Titing Manalili and forward Rhaffy Octobre discus a point in one of their games in the MPBL Lakan Cup. | MPBL photo

Cebu City, Philippines—The Cebu Sharks-Casino Ethyl Alcohol will try to get back on their feet when they take on expansion team, the Iloilo United Royals, in the Maharlika Pilipinas Basketball League (MPBL) Lakan Cup on Monday, July 15, 2019, at the Valenzuela Astrodome.

After a decent start, the Sharks have now lost back-to-back games to fall to 2-3 (win-loss).

Both losses have been of the heartbreaking variety, first losing to the Biñan City Laguna Heroes in overtime, 81-83, and then to the Valenzuela Classic, 69-66, last Thursday, July 11.

According to Sharks’ forward William McAloney, the team still needs more cohesion, an important ingredient to their team’s defense.

“I think we just lacked good, solid defense. Then also, unity. We still need to work on our chemistry, especially during crucial game situations,” said the left-handed forward out of the University of San Carlos (USC), who has been nothing short of a revelation in his first two seasons with the Sharks.

McAloney admitted that they also need to keep up with Iloilo’s fast-paced attack anchored on the guard play of the likes of Ryan Arambulo and former Southwestern University standout, Jasper Parker.

“Iloilo is a run-and-gun type of team so that’s what we really worked hard for in practice. We just need to fight through this slump. We can’t accept this losing streak any longer.” /bmjo

Read Next
Pacquiao not slowing down anytime soon—Fortune