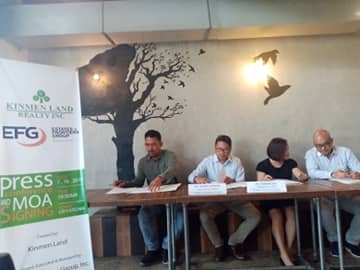 Bennett Palang, president and chief executive officer of Kinmen Land Realty Inc., said they acquired the property in the early 1980s yet.

However, it was not until lately that the company decided to develop the area located at  Barangay Kamiao, Compostela, Palang said.

He said the Compostela township is Kinmen’s first project in Cebu. The company’s first development project was The Strip Mall at Pala-o, Iligan City with an area of 4,700 square meters. It was constructed in 2006.

According to Palang, their company, which he and three other siblings owned, was more into land banking, acquiring properties in Visayas and Mindanao.

They first wanted to sell the Compostela lot at a low price.

However, they decided that it was the right time to develop the property, with the growing market demand. “Things just fell into place, ” Palang said.

The township project will be conceptualized, constructed and managed by Estates+Frontiers Group (EFG).

“We help landowners harvest the potential and unlock the value of their properties,” EFG president Lydwena Eco said.

Eco clarified that the 20-hectare development is wholly owned by Kinmen Land.

She added that they have yet to come up with an official name for the project, which they temporarily called Santiago De Compostela.

It will be a mixed-use development, which upon completion would meet the live-work-play concept.

The project will be implemented in several phases, with the flagship 4-hectare ranch component to be implemented first. “We wanted to offer something that has not been available in  Cebu,” Eco said.

She said they will build between 40 to 80 single detached houses with garden space for the first phase. The target will be to build around 2,000 house and lot units to be priced between P2 to P3 million each.

The target for full completion of the project is between five to 10 years, depending on market velocity, Eco said./dcb