Netizen tells Cebuanos: For your security, lock your car doors 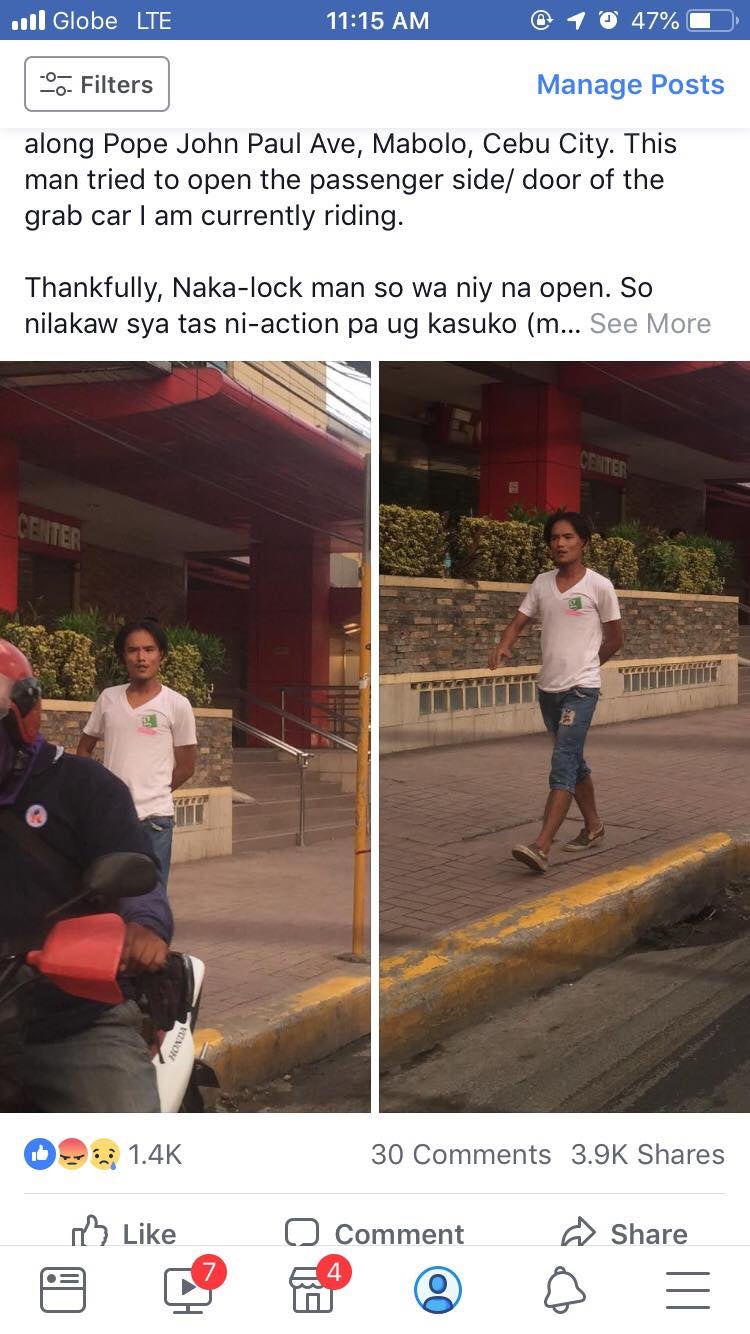 Lady Jane shared on her Facebook page a picture of the man who tried to open the door of the Grab car which she hailed on her way to work on July 18. /Screen grabbed from Lady Jane’s Facebook post.

Lady Jane, 25, said that the simple habit of locking car doors could already save lives.

She shared a traumatic experience which happened at around 9:50 a.m. on July 18 when a still unidentified man tried to open the right passenger door of the Grab car which she boarded on her way to work.

Lady Jane took the TNVS  ride from her home located near the St. Joseph’s Parish in Barangay Mabolo on her way to the recruitment agency where she works for at the Cebu IT park.

She said that the TNVS that she boarded made a stop along Pope John Paul Avenue while its driver waited for the traffic light at the intersection of Governor Cuenco Avenue near the Technical Education and Skills Development Authority (TESDA) regional office would turn green.

While she was comfortably seated at the back, a man suddenly appeared and tried to open the right passenger side door.

“I was on my way to work. Then medjo hinay ang flow sa mga sakyanan that time, pag stop sa grab na ako gisakyan, naay laki na nikalit tunga gawas sa passenger side sa front seat and tried to open the door. He wasn’t able to open it kay naka lock, so nilakaw sya, murmuring something and tried to slap/punch the window before he went to another vehicle behind us” shared Paler to CDN Digital.

(I was on my way to work. Then traffic was starting to build up when the grab car stopped, a man tried to open the passenger seat door. But he was unable to do so because it was locked, so he went away while murmuring something and tried to slap/punch the window before we went to the vehicle behind us.)

Unable to open the door, Lady Jane said that the man, who appears to be in his late 20s or early 30s, pounded on the car window while murmuring something before he finally left.

“It happened so fast, so I was really shocked at first. Both the driver and I looked at the passenger door at the same time. Luckily all doors were locked,” she said.

Lady Jane, who refused to give her full name for her security, said she immediately called 911 for assistance. She recalled that she was literally shaking from fear when she called for dialed the police hotline.

She said that she is now waiting for the outcome of the investigation by Mabolo police on the incident.

Wanting to warn other commuters, Lady Jane shared her experience on her Facebook page on the same day together with a picture of the still unidentified man who tried to open the passenger door of the Grab car which she boarded.

“I shared the post online to raise awareness to the people especially those riding alone or those who are not a big fan of locking doors. This time let’s all be vigilant,” she said in an interview with CDN Digital.

Lady Jane said that threats of harm are inevitable even in broad daylight. /dcb

Read Next
Osmeña to Labella: Allow me to restore Mayor’s Office