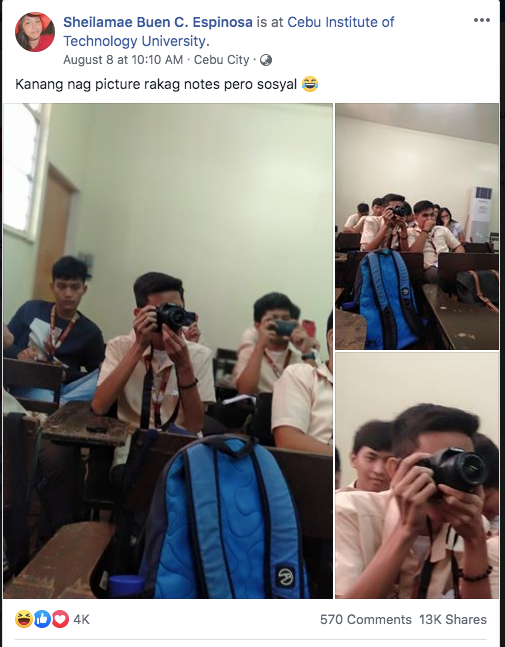 CEBU CITY, Philippines— Everything is always better with a high resolution.

Gone are the days when students would just write super fast just to follow through the discussion and to take down notes.

Today, students are seen raising their smartphones to take pictures of the presentation from their teachers, but what’s a classroom discussion without a little hint of fun, right?

Sheilamae Buen Espinosa, 18, shared on her Facebook account last August 8, a picture of her classmate, Celdon John Rodaje, who took out his professional camera to take pictures of the notes presented in front.

“It was taken during our Chemistry class. Since our teacher is using PowerPoint on her discussion most of our classmates took photos of each slide,” Espinosa said.

She said we took photos of the slides using only our smartphones, but Rodaje took it a bit farther as he took out his DSLR (Digital Single-Lens Reflex) camera to take photos of the slides and at the same time take down notes of the discussion especially since our teacher told us to remember them for our midterm exams.

“He was really taking notes (taking photos of the slides and taking down notes), but because it was unusual, we laughed, and I took a photo of him doing it,” said Espinosa.

She also told CDN Digital that she did not have any intention of making the picture go viral online, but rather uploaded it to just keep these hilarious memories with her.

I was shocked when my friends told me to open my Facebook because the photo had gone “viral” as what they said,” she said.

But to clear things out, Rodaje was really taking down notes and was just tempted to spice up the atmosphere in their discussion and took out his camera just to loosen the tension of everyone, especially that their midterms examination is fast approaching.

This generation of students sure does know how to turn a simple class discussion to a more funny and memorable one. /dbs