Cary Santiago hopes to inspire millennials through his exhibit 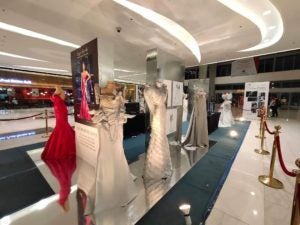 Cary Santiago, the designer and maker of Bb. Pilipinas-Universe Gazini Ganados’ winning “Phoenix” evening gown, is giving Cebuanos the chance to see his  famous collection in an exhibit called “The Aviary: The Work of a Master” at the Mountain Wing Atrium of SM Seaside City Cebu, which  started last August 8 and will run until August 26.

He said that his career had been soaring just like that of a bird, thus, making him decide to name his collection “The Aviary.”

The preservation of the Philippine Terno also inspired him to do the exhibit.

He said that much has  changed since the original baro’t saya was donned by Filipino women and the younger generations  should learn to appreciate and be exposed to the  terno, the traditional formal dress worn by Filipino women.

The Phoenix gown of Ganados is also included in the exhibit. Ganados herself chose the color of the gown, revealed Santiago.

Sketches of his creations can also be seen at the exhibit.

According to the designer, he has been motivated to inspire young designers to create their own unique versions of the terno because of organizations like the Cultural Center of the Philippines and persons like Bench founder, Ben Chan, who would want to keep the use of terno popular all through the ages.

He said he would be looking forward to the creation of a law that would standardize the Philippine terno and to encourage the younger generations to also wear the terno. /dbs