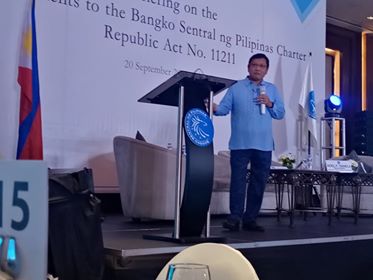 Capule was one of the speakers during the BSP information campaign held Friday, September 20,  at Marco Polo Plaza Cebu.

Capule noted that there was a need to amend the original BSP charter, Republic Act 7653,  which was passed in 1993, to enable Bangko Sentral to address the changes in the environment and the financial system.

The efforts to come up with amendments started around 20 years ago, he said. However, it was not until February this year when President Rodrigo Duterte signed into law Republic Act No. 11211, or An Act Amending Republic Act No. 7653, also known as New Central Bank Act and for other Purposes.

The law aimed at enhancing the economic and financial well being of Filipinos, he added.

BSP, as a financial regulator, would enhance its off-site supervision and examination framework, and provide expanded supervisory, examination and enforcement powers due to the amendments to its charter, said Noel Taniela, BSP supervisory policy and research deputy director.

On the other hand, the law authorizes the increase in BSP’s capitalization from Php50 billion to Php200 billion, which would be taken from dividends declared by BSP in favor of the national government, according to Capule./elb