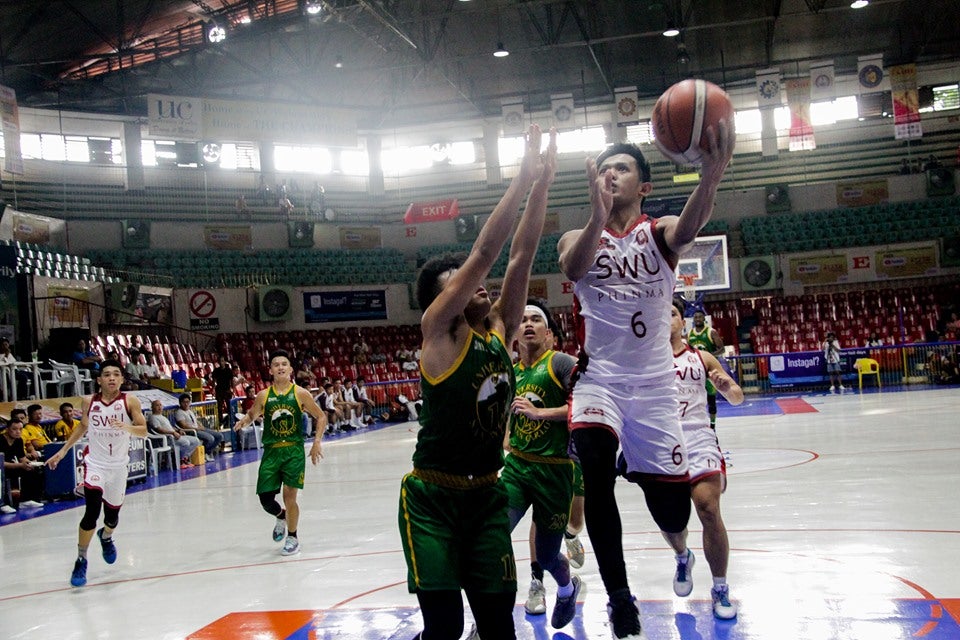 Sir Shaquille Imperial scored a go ahead layup to bring the Southwestern University Cobras past the University of San Carlos Warriors during their game on Saturday, September 21. | Gerard Vincent Francisco

Cesafi Games on Sunday, September 22, 2019 at the Cebu Coliseum

CEBU CITY, Philippines – A clutch shot from Sir Shaquille Imperial with 7.8 seconds remaining in the ballgame paved the way for Southwestern University (SWU) Phinma Cobras to take on the solo leadership in the college division of the 2019 Cesafi Men’s basketball Tournament.

William Rosebelt Polican, then, with his two gift shots, sealed the win for the Cobras against the University of San Carlos (USC) Warriors, 62-59, during their game on Saturday, September 21, 2019.

The win gave the Cobras a clean 3-0 win-loss record and dropping the Warriors to the second spot with a 3-2 card.

(That was a lucky rebound. I call that a lucky rebound because we weren’t expecting anymore because time was running out. We just stuck with coach Mike’s system.)

The Warriors had the upper hand from the start of the game taking a five-point lead in the first quarter, 19-14, which they increased to seven points, 34-27, at the halftime break.

With the solo leadership on the line, the Cobras were not about to give up and opened the third quarter with four straight points courtesy of import Lamine Thiam and Allyn Dyll Roncal to bring USC’s lead down to three, 33-36.

Thiam top-scored for the Cobras with 24 points.

(They prepared for us, and we did too.  We were off during first, second and third quarters because we were still making adjustments with our defense. Coach Mike told us to stick to our system and focus on our defense.)

In the fourth quarter, the game got tied twice before USC managed to wedge a four-point gap courtesy of Joshua “Magic” Marata.

But Polican kept the Cobras close at just a basket behind until Imperial managed to hit the clutch shot with just seconds remaining.

The USJ-R Jaguars, last year’s runner-up, dropped to a 1-2 card.

(I feel proud. We feel proud as a team that we took the challenge to score another win because the first round is almost over.)

Galinato and import Tosh Sesay towed the Webmasters with 17 points each.

The Jaguars were just a basket behind the Webmasters at the end of the first quarter, 17-19, but the Webmasters started controlling the game until the final canto when they brought their lead up to 31 points, 79-48.

The other game had the defending champions UC Baby Webmasters extending their streak to 3-0 with a 65-60 outsmarting of the Cebu Institute of Technology University (CIT-U) Wildkittens. /dcb