Two Cebuanos were recently recognized as 2019 winners of the annual search  the Ten Outstanding Maritime Students of the Philippines (TOMSP) in line with the 24th National Seafarers Day (NSD).

The two students are  E/c Dustin Ryan Veridiano, of University of Cebu (Lapu Lapu/Mandaue)  and  D/C William Catacutan of  University of the Visayas (Main Campus).

The chosen TOMSP students are seen as the embodiment of the “ideal seafarer,” displaying “integrity, passion, assertiveness, dependability and camaraderie” that will allow them to become globally competitive Filipino seafarer.

The  search gave recognition to students for being academically excellent, highly competent in practice, in good moral standing and active in their respective communities. 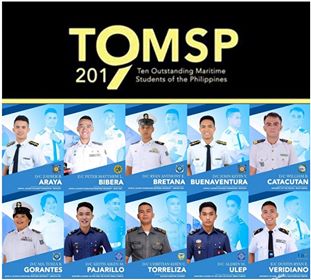 As one of the judges, some of the questions that I asked include their position on the West Philippine Sea  issue.

The largest number of winners came from  JBLCF – Bacolod with fifteen students.

They are followed by   eleven students from  Maritime Academy of Asia and the Pacific (MAAP) IMMAJ Campus   and another eleven  11 from  from  MAAP CGSO  campus.

With this year’s NSD theme “Marinong Filipino-Kababaihan: Palakasin sa Industriya!” nine  female students were awarded since the TOMSP search begun in 2011 wherein four came from the MAAP, one from University of Cebu, one from PMMA, one from Colegio De La Purisima Concepcion-Roxas, one from JBLCF Bacolod and latest winner D/C Ma. Toiza Boriba Gorantes is   from JBLMU-Arevalo.

Higher maritime education usually consists of four-to five-year college degree programs for either marine transportation or engineering. Most commonly, the students go through a four-year structure (3 – 1) which stipulates three years of academic study prior to onboard job training in the final year. An alternative approach is a 2 – 1 – 1 structure which schedules the onboard job training for the third year. After the one year job training, the students go back to school to finish their last year.

Philippine maritime schools annually produce some 40,000 graduates while a  2018  study by the Maritime Industry Authority (MARINA)  showed that an average of  about 18% of enrollees manages to complete the full academic three years.

Former president Fidel V. Ramos issued on July 9, 1996 Proclamation No. 828 declaring Aug. 18 as National Seafarers’ Day aimed at giving due recognition to the vital role of Filipino seafarers towards the development of the Philippines as a maritime country. Later, Proclamation No. 1094 was issued in 1997 by President Ramos which moved NSD to every last Sunday of September every year.

The Apostleship of the Sea (AOS) Philippines was tasked to coordinate with the public and private sectors in activities related to the celebration of said event. The Sunday masses all over the country were offered to the Filipino seafarers.

The ten awardees received a plaque, gift pack, and  cash from Western Union, a review scholarship from St. Nicholas Review Center, and a gift pack from Seaker.