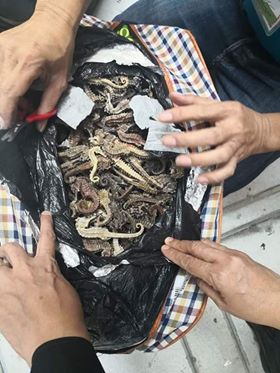 These are the seized dried seahorses intercepted at the Mactan Cebu International Airport on Oct. 4, 2019 by the personnel of Customs and the Bureau of Fisheries and Aquatic Resources from three Chinese nationals who were bound for Macau. | Photo courtesy of the Bureau of Customs

CEBU CITY, Philippines —Another attempt to smuggle dried seahorses out of the country has been stopped by the personnel from various government agencies when they intercepted three Chinese nationals who were about to leave the Mactan Cebu International Airport bound for Macau.

A report posted on the Bureau of Customs Cebu Facebook page said that personnel from the Bureau of Customs, the Bureau of Fisheries and Aquatic Resources (BFAR), Transnational Aviation Support Services Inc. (TASSI) and Counter-Terrorist Unit (CTU) intercepted 32 kilograms of dried seahorses from three Chinese nationals on October 4.

The dried seahorses were confiscated for violation of the provisions of Republic Act No. 8550 (The Philippine Fisheries Code of 1998), Fisheries Administrative Order (FAO) No. 233 and Republic Act No. 10654 (An Act to Prevent, Deter and Eliminate Illegal, Unreported and Unregulated Fishing).

Seahorses are among those considered as endangered species.

BFAR-7 has taken custody of the three Chinese nationals who were brought to its regional office along Arellano Boulevard, Cebu City for further investigation. 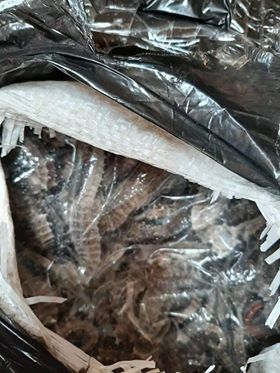 These are the seized dried seahorses intercepted at the Mactan Cebu International Airport on Oct. 4, 2019 by the personnel of Customs and the Bureau of Fisheries and Aquatic Resources from three Chinese nationals who were bound for Macau. | Photo courtesy of the Bureau of Customs

In a phone interview, lawyer Kim Labasan of BFAR7 told CDN digital on Wednesday, October 9, that the three Chinese nationals were issued a notice of violation for possession of aquatic wildlife after they were brought to the regional office.

However, the Chinese nationals were set free after they offered to settle. They were allowed to pay a settlement penalty since they were first time offenders, Labasan said.

Labasan said he was not privy to how much fine was paid, of if the foreigners are still in Cebu or have returned to their country.

He added that the dried seahorse was kept at a secure area in the regional office, pending disposal 15 days after it was confiscated.

Seahorses, while an endangered species, are known to abound in the waters of Bohol and Cebu.

According to Project Seahorse, the continued demand for seahorses as ingredients in traditional medicines, for display in aquariums, and as curios resulted in increasing number of the animals caught and traded every year. /elb

Read Next
Ibones: No maltreatment of CICLs in Operation Second Chance