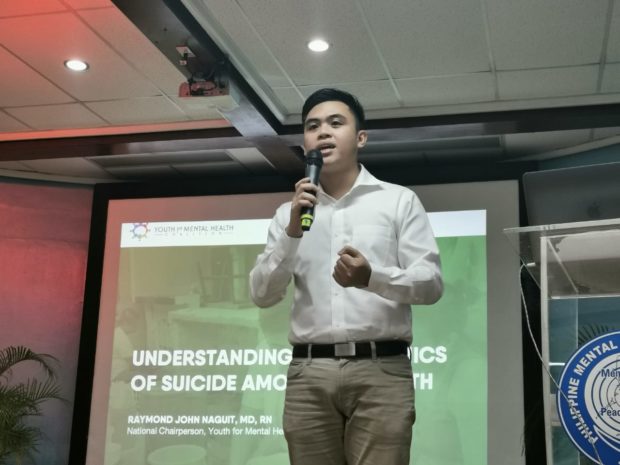 MANILA, Philippines — A mental health advocate on Wednesday advised future psychologists to openly ask people if they are contemplating suicide, believing they have better chances of preventing it that way.

“Don’t be afraid to ask if they are having suicidal thoughts,” said Dr. Raymond John Naguit, national chairperson of the Youth for Mental Health Coalition (YMHC).

“The usual misconception is that if you talk to that person about suicide, it’s as if you are implanting it on someone’s mind. But there have been a lot of studies already saying that it’s not like that,” Naguit told students at a forum in Quezon City in celebration of the World Mental Health Week.

“And actually, if you map out and there’s a clear intent that you know the other methods the person might use, you might be in a better position to address the suicide act,” he added.

“Because if you comfortably use the term ‘suicide,’ it can also convey that you are in a better position to address it later on,” he said.

Naguit later told students who are uncomfortable or unsure if they are dealing with someone who is in distress: “You best to consult a professional, refer them.”

Naguit provided three questions that he said should be asked from people contemplating suicide.

“You need to ask for the method, for the time, and the possible place where the attempt would be done,” he said.

“We have to understand if the plan is more detailed,  the more likely the suicide act will happen,” he added.

And either it was made in a serious tone or light-hearted manner, Naguit  said that all pronouncement of suicide “must be taken seriously.”

“Even if it’s said in jest, because sometimes they usually joke about it,” the mental health advocate said.

“So we need to clarify, the first step is to clarify the intent,” Naguit added.