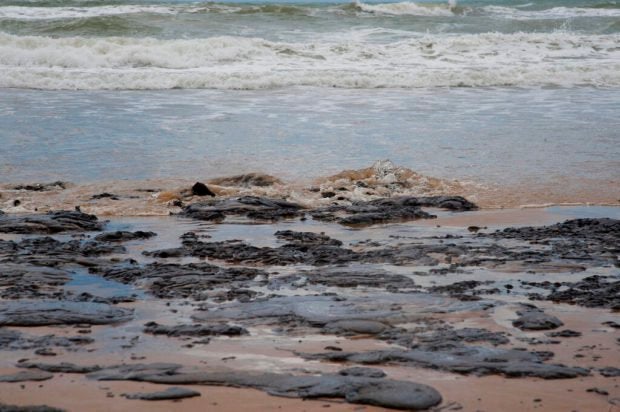 An oil spill covers a beach on Sergipe state, Brazil in this September 25 photo.  (Sergipe State Government via AP)

RIO DE JANEIRO — A mysterious oil spill that has polluted at least 150 beaches along Brazil’s northeastern coast reached the city of Salvador on Friday as officials tried to determine the source of the crude sludge.

Authorities confirmed the oil had reached the Piata beach in Salvador, Brazil’s fourth-largest city that’s known for its beaches and Afro-Brazilian culture. Overall, 68 municipalities in nine states have been affected by the spill that began on Sept. 2.

A report from Brazil’s Institute of the Environment and Water Resources said the origin of the sludge has still not been determined, though environment minister Ricardo Salles earlier said the oil was likely of Venezuelan origin — something denied by Caracas. The main hypothesis is that the oil spilled from a vessel passing near the Brazilian coast.

After studying the ships that passed through the region, Brazil’s Navy on Thursday began asking 30 oil tankers from 10 different countries for clarifications of their actions.

The environmental institute said 12 sea turtles and a bird have died after coming in contact with the crude oil.

Brazil’s environmental protection agency has said it fears the oil spotted could just be a small fraction of what was spilled, noting there are some 2,000 kilometers (about 1,242 miles) of coastal line to monitor. The oil has been particularly hard to track as it floats under the surface of the water and can’t be easily detected from planes.