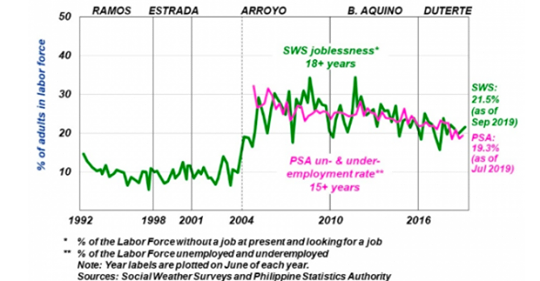 MANILA, Philippines — An estimated 10 million Filipinos find themselves jobless in the third quarter of 2019, according to the latest Social Weather Stations survey released Saturday.

The latest survey, conducted from Sept. 27-30,  revealed that it found the unemployment rate among Filipinos at 21.5 percent, an increase from 20. 7 percent last June and 19.7 percent in March.

Other respondents said they became unemployed after their contracts ended and were no longer renewed (5.8 percent), the operations of their previous employers closed (1.3 percent), and were laid off (1.3 percent).

As for the Visayas, the percentage for unemployment fell at 11.8 percent, compared to 18.1 percent recorded last June.

The survey also found that the joblessness rate was significantly higher among women, at 31.4 percent, rather than among men, rating at 14.6 percent.

Because of this, the SWS said, the joblessness rate gender gap rose to 16.8 percent in September, compared to 14.2 percent last June.

The survey, which used face-to-face interview of 1,800 adults (18 years old and above) nationwide, had a sampling margin of error at ±2.3 percent for national percentages, ±4 percent each for Balance Luzon and Mindanao, and ±6 percent each for Metro Manila and the Visayas.

The respondents were asked also the following questions for their survey:

Do you have a job at present, not have a job at present but used to have a job, or never had a job?
Are you looking for a job or planning to establish a business or not? YES or NO
Which of the following applies to you (SHOWCARD: Never had a job before, Was laid off from former job, Previous contract was finished and not followed with a new contract, Previous employer closed operation, or Voluntarily left old job?

Do you think there will be more jobs, no change in available jobs, or fewer jobs?

Read Next
Bong Go challenges Robredo: Kill the drug lords if you can