Lapulapu’s Pestle and Museums for Mactan

All the pre-games nitpicking and fake news intended by detractors to pull the country down as it prepared the venues for the games have now been silenced not just by the overwhelming unity and team spirit displayed by our athletes from all over the country but by the favorable comments made by participants from the other Southeast Asian nations. There is a lesson to be learned here especially for those who wished that these games—or even its opening ceremony—would be a flop: Together We Win as One!

The headline of the December 29, 1929 issue of “Progress”, the English-language broadsheet published by Sen. Vicente Rama, screamed “Tobacco Pipe, Pestle of Lapulapu and His Wife Discovered in Mactan.”

As if this was not enough, the accompanying story carried these sub-heads “Antiques Will be Made Exhibits for 1930 Carnival” “THING VERY RARE” (in capital letters), and “Opon, First Municipality to Set Aside P500 Budget”. 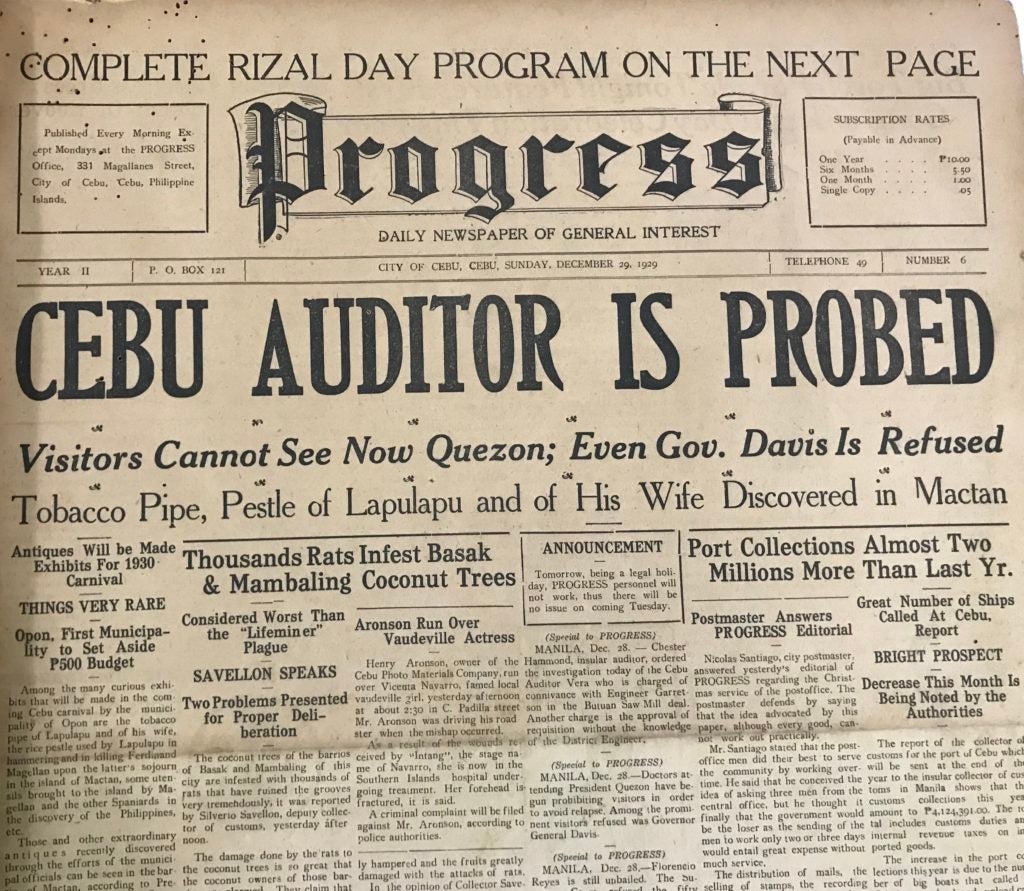 Photo showing the banner stories of the “Progress” issue on December 29, 1929.

In this banner story, the unnamed reporter or writer states that the abovementioned “rice pestle” was used by Lapulapu in “hammering and in killing Magellan”.

How was this found? Apparently, the municipal president (today’s mayor), Rito de la Serna, had offered cash prizes to residents of Opon who could present to him antiques that he could exhibit in the Opon booth at the carnival in April-May the following year. The unnamed writer explains it this way, “In view of the historical background of the island of Mactan, there is interest shown in the discovery of things used by former rulers of the island connected in Philippine history.” Why this renewed interest coming some eight years after the 400th anniversary of the Battle of Mactan is not explained.

Let me digress a bit. In 1921 the celebrations marking the 400th anniversary (or quadricentennial) of the Magellan expedition was held in Manila. Being an American colony at the time, the celebrations appear somewhat muted, under the leadership of Trinidad Pardo de Tavera. In Cebu, it appears that no one took notice of this milestone. That is if we go by the March to May 1921 issues of Cebu periodicals “Bag-Ong Kusog” and “The Freeman” which do not report any celebration or commemorative event, not even a Holy Mass, to mark this event.

This belated display of the so-called pipe and pestle of Lapulapu, which I mentioned a bit in a previous column, actually became quite a sensation at the time, having been brought by the Baring family to Don Sergio Osmeña in a presentation ceremony complete with a photograph that sadly I can no longer locate.

Questions were not asked as to how these items survived. Perhaps we had fewer historians and scientists of critical mind to ask such impertinent questions. Coming on the heels of the campaign for an independent Philippines, presenting such objects, no matter if incredible, would sure help in asserting a historically-rich past.

Fast forward and we come to the present where of late someone told me that he had a friend reported excavating a burial beneath a house they were building and that the head of the burial was lying on a plate made of gold! There is no dissuading a person from believing in such fantastic and culturally-unfounded stories. Never mind if Spanish missionaries never reported that we had plates of gold. Like those fake stories that were uploaded on social media as the SEAGames was about to start, there will always be gullible people.

Fortunately, the truthful, the real and the factual will rise in Mactan via two museums to be unveiled in 2021. The first one is to be set up by the National Historical Commission of the Philippines (NHCP) right at the Liberty Shrine in Punta Engaño. Just a stone’s throw away, to the south of this park will rise another museum within the Mactan Newtown complex of Megaworld. It is hoped that with these two museums, all these fantastic stories and claims about Lapulapu and his people will be put to rest.

All these efforts will officially commence with the 500-day countdown on Saturday at the Lapulapu City Hoops Dome, with no less than Pres. Rodrigo Duterte in attendance.