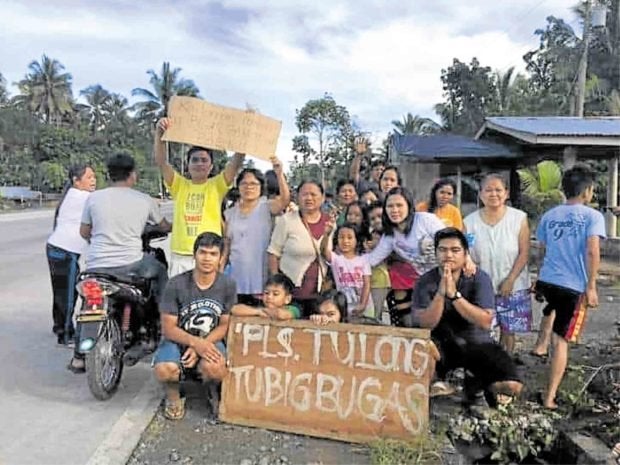 IN URGENT NEED. Earthquake evacuees in Makilala, North Cotabato province, take to the roadside with signs appealing for food and potable water in this October 2019 photo. | Inquirer file photo

CEBU CITY, Philippines — The relief goods collected by the Capitol for the earthquake victims in Mindanao have not reached their beneficiaries since the start of the donation drive over two months ago.

The Cebu provincial government launched on November 2, 2019, the “Sugbo Alang sa Mindanao” donation drive to get immediate help for the victims of the series of earthquakes in the Davao del Sur and North Cotabato.

In an interview on Wednesday, January 8, Neil Angelo Sanchez, Cebu Provincial Disaster Risk Reduction and Management Office (PDRRMO) head, said it was only this week that the relief goods had just been pulled out from the Provincial Social Welfare and Development Office (PSWDO).

Sanchez said they were now waiting for the Philippine Coast Guard District Central Visayas (PCG-7) to deliver the goods to Mindanao.

Instead of sending the relief pack to those hit by the earthquakes last October, Sanchez said they would realign the over P82,000 worth of food packs, water and toiletries and give them instead to the victims of the earthquake last December, also in Davao del Sur.

Sanchez said the PDRRMO and PSWDO also had to prepare and respond to the two typhoons that hit Cebu in the last two months of 2019 — Tisoy in November and Ursula in December, prompting the delay in delivering the relief goods to Mindanao’s quake victims.

(We intend to deliver the goods within the week. We just had to deal first with the relief for those who were hit by the typhoons here.)

Aside from the relief goods, the Cebu provincial government  sent last November P20 million of financial assistance to the local government units in North Cotabato and Davao del Sur that were severely affected by the earthquakes.

(We had already talked with Wilson (Ramos) about the relief goods intended for Mindanao and we told him to just put the relief goods to the ones that were the new earthquake victims in Davao del Sur. This is because we have not yet given them financial assistance. They have a share but a smaller amount because we prioritized those who were victims of the first earthquake.)

Governor Gwendolyn Garcia earlier said the amount of financial assistance given to the towns would be distributed equitably based on the damage in the areas.

Makilala town in North Cotabato received P7 million to help the 20,704 families or over 105, 520 individuals who were displaced by the earthquake while the towns of  Tulunan, Cotabato and Magsaysay, Davao del Sur each got P3 million for their 3,000 displaced families.

Kidapawan City and Magpet in North Cotabato received P2 million each while Matanao, Bansalan, and Digos in Davao del Sur received P1 million each to help their over 1,000 affected families./dbs