“The Sinulog is a war dance full of variation of Joloano origin…reminiscent of jousts and ancient tournaments,” writes Felix Laureano in Recuerdos de Filipinas, his ground-breaking book of Philippine photographs published in Barcelona, Spain in 1895. The image he took of this dance, showing two men armed with swords and shields and surrounded by a small crowd in a clearing, was alas not taken in Cebu. For Laureano, considered the Father of Philippine Photography, saw this spectacle with his own eyes at a fiesta somewhere in Iloilo, probably in Jaro.

And in lieu of Muslim warriors fighting in a competition before the Sultan of Sulu, the dance had been appropriated, now pitting Muslim versus Christian warriors, making it a potent tool not only to entertain but also for propaganda against the Moro warriors of Mindanao that had for sacked coastal towns of the Visayas and Luzon in much of the Spanish period. Forgotten, thus, was the trading relations that had characterized the peoples of the Visayas and the Sulu Sultanate before the coming of the Spaniards. 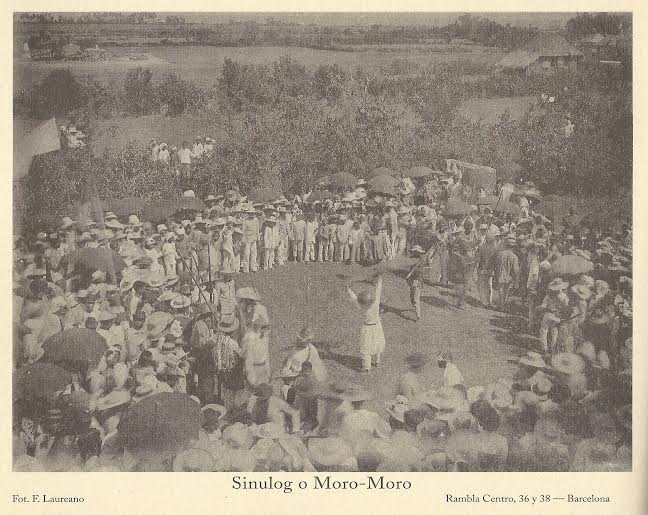 Felix Laureano’s photograph of a Sinulog or Moro-Moro performed during a fiesta in Iloilo, from his book ‘Recuerdos de Filipinas’ published in 1895.

Translated into English by Felice Noelle Rodriguez and Renan Prado and republished in 2011, Laureano’s book hints at the pervasiveness of the dance, where he states that “(t)his spectacle takes place during important town feasts of the populace.”

With this photo, Laureano may have inadvertently rent asunder the claim that the Sinulog is an ancient, pre-colonial Cebuano dance. And yet of all the towns in the Visayas, this variant of the Sinulog apparently prospered and survived in Cebu and apparently only in Cebu alone.

In truth, Lureano is only telling half or even a quarter of the actual story. His words above in fact contain an important caveat: that the Sinulog is a dance full of variation. It is this variation that we shall look into in this brief essay.

Pigafetta’s Dance of the Babaylan

There is no doubt that music and dancing was and has always been a part of the social and religious life of Cebuanos. We are told by Antonio Pigafetta in his account of the Magellan expedition that on the day Rajah Humabon and Ferdinand Magellan finally met around April 9, 1521 or  two days after the Spanish expedition docked at the port of Sugbu, the Spaniards were entertained by bare-breasted girls carrying small brass bells and gongs, in a house they were ushered into after the day’s negotiations with Humabon had ended. But Pigafetta does not mention that Juana, Humabon’s wife, had danced after receiving the image of the Santo Niño before hearing mass some days after she and many others in her retinue had been baptized.

Instead, we know that days after this, curious about native rituals, Magellan asked Humabon if one could be performed before him. With ceramic bowls and a large gong serving as percussion instruments, three old women, all of them babaylan, the native word for a ritual healer or priestess, performed something that one can still witness, if invited, among the Manobo of Agusan today: the ritual sacrifice of a pig to honor God, Malaon to Humabon and his fellow natives, Magbabadya to the Manobo peoples of the present. About three decades ago, I witnessed just such a ritual in Butuan and the way the baylan or balyan, as the Manobo call their ritual practitioners, danced in a trance before slaughtering the pig, almost approximates Pigafetta’s detailed description of what he witnessed. Only the bamboo flute played by Humabon’s babaylan was missing.

Considering that Rajah Kulambo, the chief of Butuan described by Pigafetta was an ally of Humabon, there is no doubt that the two realms, Butuan and Sugbu, may have shared not just trading relations but also artistic and musical traditions 500 years ago. Alas, Cebu went into an almost-complete Hispanization in the centuries that followed. The Manobo of Agusan—as well as the other indigenous peoples of Mindanao—managed however to cling, albeit precariously, to their precolonial culture well into the end of the 20th century. It is to them that we turn to if we want to see the intangible heritage that were eventually subsumed—not lost but masked in Catholic rituals—in Cebu in the centuries that followed. Consider, for example, what an American history professor named Leonard Irving witnessed as Cebuanos celebrated the feast of the Santo Niño in 1921, the 400th year (or quadricentennial) of the Magellan expedition.

“When the proper moment had arrived the priest at the altar gave a signal and the huge portals swung inwards with a mighty crash. Immediately the great nave of the ancient church was filled with a mass of howling, gesticulating humanity which rushed headlong into the chapel giving vent to piercing shrieks and unnatural cries. The violence of the scene did not abate when the mob—the word is used advisedly—surged into the presence of the imperturbable image but rather increased. Men and women, many with infants in their arms, began to dance and caper, holding up the bewildered babies towards the impassive little figure, and never ceasing for a moment to utter unearthly howls. Many of the women wore white handkerchiefs upon their heads which, while hopping about grotesquely, they snatched off, waved wildly in the air, and tore them to shreds in the Bacchanalian fury which seemed to rend them. It seemed, indeed, as if a Filipino Bedlam had broken loose in the venerable old church and had worked itself into a frenzy of ungovernable proportions.“

That, in part, is how Irving vividly details in his journal, now deposited at the Bentley Historical Library of the University of Michigan, of what is doubtless the first-ever description of the pagan Sinulog ritual performed right inside the Santo Niño Church. Too bad that, unlike Pigafetta, he did not exert any effort to inquire as to the name of the dance he just witnessed, nor did he write down what those ‘unearthly howls’ were. Unfamiliar with the Cebuano language and probably confused amid all the din and noise more suited at a pagan temple than inside a Catholic church, the shout “Pit Senyor,” short for “Sangpit Kang Senyor!” (Call on the Lord!) was lost to his foreign ears.

It is to Irving’s credit however that we now have this vital variant of the Sinulog, one that we can still see danced in a more subdued form by candle sellers outside the church and the Magellan’s Kiosk today. The gesticulation and the utterances, more like chants, are still present but the waved handkerchief is now replaced by the votive candle.

The American anthropologist Sally Ann Ness, in her seminal scholarly work on the Sinulog published in 1992 entitled, Body, Movement, and Culture Kinesthetic and Visual Symbolism in a Philippine Community, calls this the “Tindera Sinulog” version.

The Sinulog Dance Drama of the Diolas

So what happened to the Sinulog or Moro-Moro version that Laureano had witnessed some three decades earlier in Iloilo?

A variant was actually performed by boys, armed with wooden swords and shields, outside the houses of wealthy Cebuanos in the Parian district even way before Laureano’s time. Ness was able to trace this in the Diola family of Sitio Santo Niño, Mabolo, whose most prominent bearer was the late Estelita’Titang’ Diola. Through a series of interviews with her in the early 1980s—just as the third variant, the festival version of the Sinulog, was beginning to take root—Ness tells us that as far as Nang Titang could recall, a relative named Iklot already performed the Sinulog.Moro-moro dance drama featuring an imagined battle between Christans and Muslims, way back in the 1860s.

Note that this happens just as Cebu’s economy was perking up after its port was finally opened to foreign merchant ships following three centuries of deep slumber. Moving from one wealthy house to the other as in the Christmas tradition of ‘panaygon’, performing in exchange for a few pesos, the tradition was eventually handed down by Iklot to his favorite drummer, someone named Juancho who, in his old age in turn bequeathed the troupe performance to Titang’s father, Buenaventua “Turang” Diola sometime during the American colonial period. Turang, steeped into the ancient Filipino martial art of arnis, is said to have infused some steps from it to his version of the Sinulog. Much later, Turang passed the baton on to his star drummer, Macario Buntilao (or Bontilao) in the early postwar years. Titang Diola (with drum) leading a Sinulog performance before a house sometime in the 1970s, screenshot from the ‘Sugbo, Sinulog ug ang Santo Niño’ episode of the Kabilin television show aired on SugboTv in 2012.

In 1965, a Sinulog competition was held in Cebu as part of the celebrations marking the fourth centenary of the arrival of Legazpi and the Christianization of the country. Performing for over a hundred years already, the Diola troupe won handily. The participation of young Titang Diola, a woman, infused for the first time female participation in the once all-male dance drama which Ness liken to the Seises. The Seises was a dance performed in the Cathedral of Seville and along its streets during a feast, a tradition that started in the 15th century with just six boys, hence the name, but growing in number over the centuries. Titang Diola (with drum) leading a Sinulog street performance sometime in the 1970s, screenshot from the ‘Sugbo, Sinulog ug ang Santo Niño’ episode of the Kabilin television show aired on SugboTv in 2012.

With Titang Diola’s unfortunate demise, the Moro-Moro variant of the Sinulog, continues and will in fact be performed anew by her young descendants at the grounds of Casa Gorordo Museum on Monday, the day after the Sinulog Festival. Estelita ‘Titang’ Diola during an interview, screenshot from the ‘Sugbo, Sinulog ug ang Santo Niño’ episode of the Kabilin television show aired on SugboTv in 2012.

What we have therefore today are three variants of the Sinulog: a glimpse at precolonial ‘dayegon’ or praise dance, complete with a prayer to the heavens, in the candle sellers, the troupe of the Diolas and the more modern and fairly recent Sinulog-based competitive performances designed for tourists and visitors as much as for Cebuanos.

Going back to the question of this article, how old then is the Sinulog? Well, it depends on which of these three you are referring to. For me, the oldest is doubtless the one performed right outside the Basilica or at Magellan’s Kiosk by candle sellers, a dance whose steps harken to the precolonial dances of our ancestors.

Dr. Jobers Reynes Bersales is the director of the University of San Carlos  Museum and Professor of Department of Sociology, Anthropology and History of USC. He writes the column Past Forward for Cebu Daily News Digital.