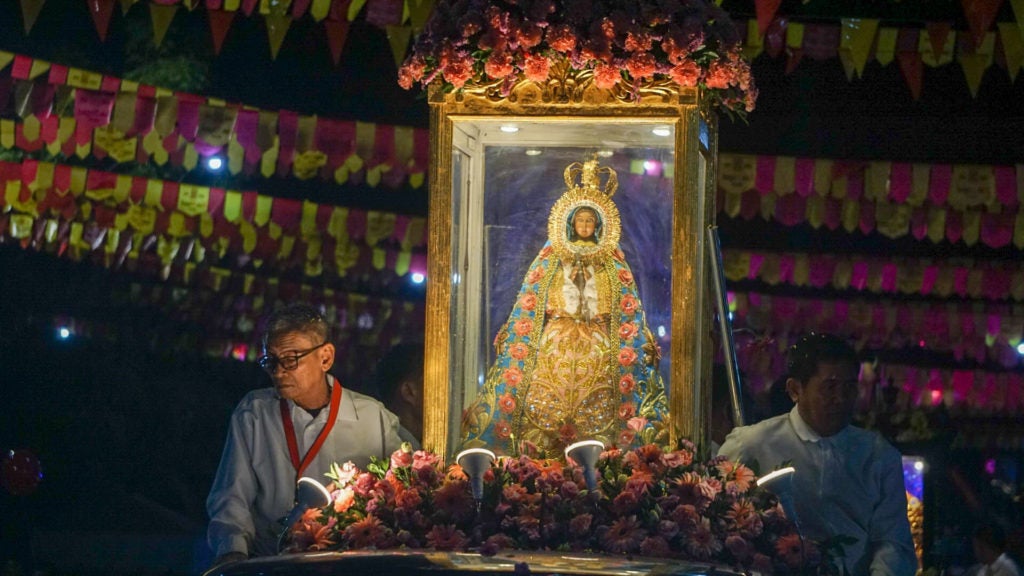 The Our Lady of Guadalupe arrive at the Lapu-Lapu City side of the Mandaue-Mactan bridge on early morning of January 18, 2018 as the image leads the motorcade with the Santo Niño image a few meters behind her on their way to the Nuestra Señora Virgen dela Regla Shrine. | Gerard Francisco

LAPU-LAPU CITY, Philippines — At midnight of January 18, 2020, when most are supposedly asleep, the streets of the cities of Mandaue and Lapu-Lapu were filled with balloons, altars, and people with eager smiles on their faces.

Devotees, young and old, stood patiently at the side of the roads and waved their hands as the stereos and sound systems that they installed play the Gozos or Batobalani sa Gugma as they wait for the  images of the Señor Santo Niño de Cebu and Our Lady of Guadalupe to pass by.

Some brought their own replica of the Holy Image of the Child Jesus and danced with it while others dressed their children like the Santo Niño.

Read more: IN PHOTOS: Walk with Mary and Traslacion

The images left the National Shrine of Saint Joseph in Mandaue City about 12:20 a.m. on Saturday, January 18, following a Send-off Mass at 11 p.m. of January 17.

The images travelled a 4.6-kilometer Traslacion route that covered S.B. Cabahug Street to A.C. Cortes Avenue heading to the first Mandaue-Mactan Bridge then to M.L. Quezon Avenue in Barangay Pajo, Lapu-Lapu City, where officials of the Mandaue City government turned over the holy images to officials of Lapu-Lapu City. 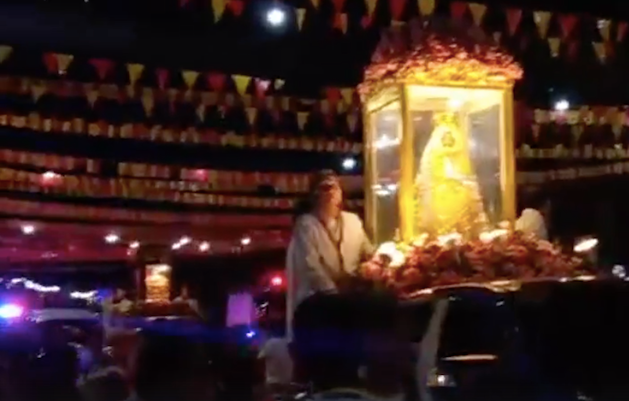 The images of the Señor Santo Niño and Our Lady of the Rule arrive at the foot of the Lapu-Lapu City side of the bridge at past 1 a.m. of January 18, 2020 where Mandaue Mayor Jonas Cortes turns over the images to Lapu-Lapu City Mayor Junard Chan. | Rosalie Abatayo

Police Colonel Clarito Baja, Lapu-Lapu City Police, said at least 5,000 people witnessed the Traslacion from the city’s side of the Mandaue-Mactan Bridge until the National Shrine of the Nuestra Señora Virgen dela Regla.

In an interview, Baja said the city police deployed at least 300 police personnel to ensure the security along the route of the Traslacion.

At 4 a.m., the Nuestra Señora Virgin dela Regla Shrine celebrates a Holy Mass for the images before they will again be moved to the Naval Forces Central (Navforcen) in Barangay Looc for the fluvial procession at 6 a.m.

From the Captain Veloso Pier in Navforcen, the images embark on a two-hour journey with over 179 other vessels to Pier 1 in Cebu City  where they will be carried back to the Basilica Minore del Santo Niño for the reenactment of the first baptism at 9 a.m.

The annual Traslacion from the Basilica to Mandaue City then to Lapu-Lapu City and the fluvial parade are among the highlights of the religious activities in time with the Fiesta Señor or the celebration of the feast of Señor Santo Niño de Cebu./dbs