One cop killed, another wounded in a shootout with armed men at a police checkpoint in La Libertad, Misamis Oriental 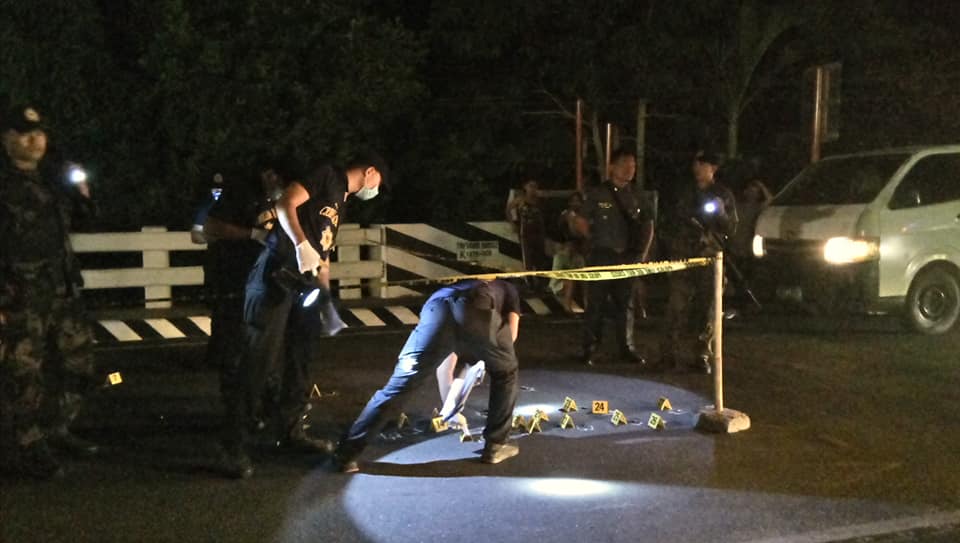 The Scene of the Crime Operatives (Soco) of the La Libertad Police Station in Misamis Oriental cordon the area where a policeman was killed and another was wounded following a shootout with a group of armed men past 8 p.m. of Feb. 17, 2020. One of the suspects was killed in the shootout. |Photo courtesy of IFM RMN

CAGAYAN DE ORO CITY, Philippines – A policeman was killed while another police officer was wounded when a group of armed men on board a vehicle fired at a group of policemen manning a checkpoint in the town of Libertad in Misamis Oriental, some 50 kilometers west of this city, on Monday night, February 17, 2020.

One of the gunmen was also killed by the companions of the slain police officer in the ensuing shootout, said Police Colonel Robert Roy V. Bahian, director of the  Misamis Oriental Police Provincial Office.

Bahian said a manhunt is underway for the other gunmen who were able to flee on foot after the incident.

The wounded policeman was identified as Staff Sergeant Fernando Maestrado, also of the Libertad Police Station.

Bahian said the slain suspect has still to be identified as the investigators from the town police’s Scene of the Crime Operatives (Soco) found several identification cards with different names in his possession.

He said they also found several sachets of suspected shabu (crystal meth) from the suspect.

Bahian said Caayupan and his team were conducting a mobile checkpoint on top of the Taytayan Bridge in Barangay Dolong, Libertad town when a white Mitsubishi Mirage with plate VOG 805  arrived sometime past 8 p.m.

He said the policemen flagged down the car and ordered it to stop.

“The suspects did stop their car but they also fired at the policemen, killing Caayupan,” Bahian said.

Bahian said the policemen fired back and a shootout ensued, wounding Maestrado and killing one of the suspects.

He said three of the suspects left their car and jumped over the Taytayan Bridge to escape.

A manhunt is now being conducted against the remaining suspects, Bahian said./elb