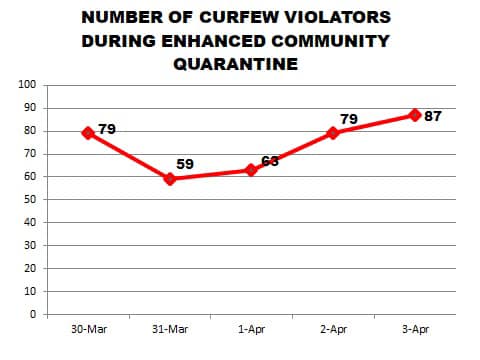 CEBU CITY, Philippines — It has been the fifth day since the implementation of the enhanced community quarantine (ECQ) in the whole Cebu province and the number of curfew violators in Talisay City continues to rise, which is now at 367.

Police Major Gerard Ace Pelare, chief of the Talisay City Police Sation, said that despite the 12 hour-detention with seminar for those who would be caught including the minors, there were still those who were caught playing basketball and loitering the streets without passes or valid reasons.

With this, Pelare said they would now be asking the community’s help to impose the rules.

“Maybe they could also help reprimand their relatives and those that they see on the streets,” said Pelare.

The police chief said that if there would still be those, who would continue to go outside and ignore the rules, which in the first place were implemented to secure the community, there might not be an end to the current crisis against coronavirus disease 2019 (COVID-19).

Read more: Talisay curfew violators to be charged; 9 others face inquest for disobedience and scandal

But if the public especially the minors would continue to violate the rules, Pelare said that they should be warned that although they were released now, they would be facing charges that would be filed in courts through a regular filing.

Pelare said that the minors, who had been apprehended, would also be charged if proven they have discernment in their actions.

“Because it would seem that they are not taking this seriously,” said Pelare.

As of this time, Pelare could only encourage the community to also lend the police some help when it comes to implementing the rules and regulations during the ECQ period./dbs