Carmel, breaking the good news to Rabie last April 23 that she has finally beat COVID-19 after 22 days. | Rabie Pogoy.

CEBU CITY, Philippines— A son’s sigh of relief touched many hearts online as he shares the struggle his mother went through amid the health crisis in Saudi Arabia.

Rabi Ian Pogoy, 25, talent manager, took to his Facebook account on April 23, when finally after 19 days his mother, who is a nurse in Saudi Arabia, finally recovered after being infected by the virus.

Pogoy told CDN Digital that his mother, Carmela Pogoy, 60, has been a nurse in Saudi Arabia for 26 years and was bound to retire next month, but this was again put on hold because of the health crisis.

“Despite her age, she was assigned to take care of the person under investigation for three days.  We got worried because we know how infectious it is, the most heartbreaking happened, that during my birthday (April 9) when I learned that my mother was COVID-19 positive “she called me saying she’s COVID positive,” recalled Pogoy.

Here are some of the messages exchanged by the mother and son during Carmel’s fight against COVID-19: 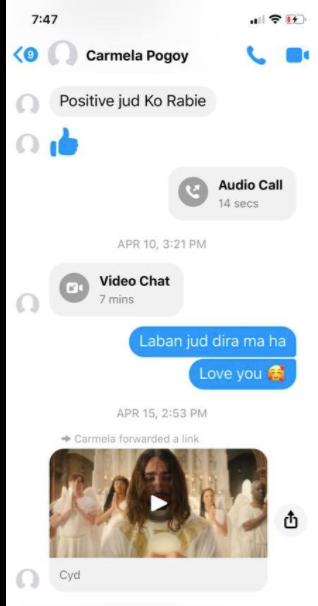 Tears streamed down his face upon learning his mother’s situation who is thousands of miles away from her family and alone.

“The first five days were the hardest for us because we could not sleep and kept on thinking about her, she had fever, cough, and diarrhea. We can’t do anything but pray for her fast recovery,” added Pogoy.

The family, especially Carmela is very thankful for her roommate, who is also a Filipino who helped her during the tough times.

After 22 days, the Pogoy family received the news that they all have been waiting for, Carmela finally tested negative or was finally COVID-free.

‘Nag videocall mi together with my grandparents. After 22 days, she tested NEGATIVE from COVID-19.  Praise God! Thank you our merciful God for hearing our prayers,” he added.

The family can now sleep soundly at night knowing that Carmel has finally recovered and was discharged today, April 26,  after fighting the deadly virus.

The fear of not being able to see his mother again, scared Pogoy but his faith overpowered this fear and received the most amazing blessing so far, his mother’s second chance at life.

Thank you, Carmel, for being one of our modern-day heroes there in Saudi Arabia for risking your life to serve others, and thank you for fighting this battle and winning it spreading inspiration and good news to everyone from across the globe. /dbs