Madonna says she has had COVID-19 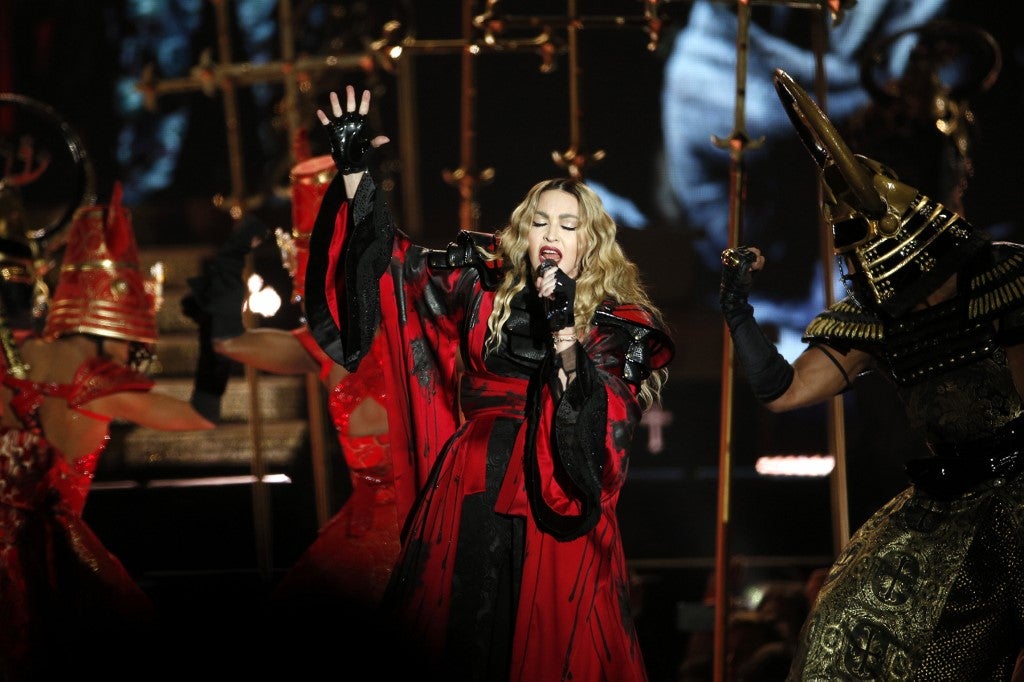 (FILES) In this file photograph taken on December 9, 2015, US singer Madonna performs during a concert at The AccorHotels Arena in Paris. – Madonna said May 7, 2020, that she has had the coronavirus and that it was why she had to cancel a concert in Paris in February, though she is not currently sick. The “Queen of Pop” said she had tested positive for antibodies which may mean she had has COVID-19. (Photo by FRANCOIS GUILLOT / AFP)

PARIS, France—Madonna said Thursday she has recovered from the coronavirus which forced her to pull out of a string of concerts in Paris in February and March.

The “Queen of Pop” said she had tested positive for antibodies which may mean she had COVID-19 — though at the time she said she didn’t realise she had it.

“I am not currently sick,” she told her 15 million followers on Instagram.

“When you test positive for anti-bodies it means you had the virus, which I clearly did as I was sick at the end of my tour in Paris over seven weeks ago along with many other artists in my show,” she said.

The 61-year-old star only played a single night in Paris on February 22 before calling off the next show, citing “ongoing injuries”.

She later called off two further Paris concerts — the last in her Madame X world tour — after French authorities banned large gatherings in a bid to stem the spread of the virus in early March.

“At the time we all thought we had a bad flu,” Madonna wrote in her post.

“Thank God we are all healthy and well now.”

The Paris dates on Madonna’s tour seem to have been cursed, with her opening night concert not starting till after midnight, three and a half hours late.

Scientists are sceptical about the accuracy of many antibody tests which claim to show a person has had the virus.

Some warned that even those tests that meet the US government’s informal standards may produce false positives.

The singer revealed she had the virus after sharing an article about her donating $1.1 million (one million euros) towards research to find a vaccine for the coronavirus.

Madonna was among 200 artists and scientists who signed an open letter Wednesday calling for radical change across the world rather than “a return to normal” after the coronavirus lockdowns.

Alongside Hollywood stars Cate Blanchett, Jane Fonda and Marion Cotillard and a clutch of Nobel Prize winners, she pleaded for an end to unbridled consumerism and a “radical transformation” of economies to help save the planet.

“The ongoing ecological catastrophe is a meta-crisis,” the open letter said.

“Unlike a pandemic… a global ecological collapse will have immeasurable consequences,” it added.

Madonna made a large donation to a fund organised by the EU to find a vaccine for COVID-19, European Commission president Ursula von der Leyen revealed last week.