After new COVID-19 cases emerged outside the national capital in recent weeks, a number of local governments have closed their borders again, this time to residents and repatriated workers returning to their hometowns after being stranded in Metro Manila and elsewhere in the country.

The provinces that are temporarily refusing to accept returning residents in parts or in the whole of their territories are Romblon, Oriental Mindoro and Quezon, in Southern Luzon; and Agusan del Sur, Agusan del Norte, Surigao del Sur, Surigao del Norte and Dinagat Island and Butuan City, all in Mindanao’s Caraga region.

The cities of Iloilo and Puerto Princesa accepted returning residents but placed them in strict quarantine and disallowed them from going home.

Bayron said the number of COVID-19 cases had risen following the arrival of residents and overseas Filipino workers (OFWs) who were stranded mostly in Metro Manila. 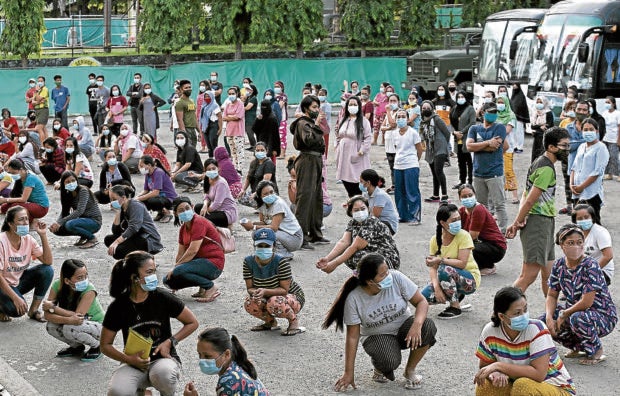 LOCKED OUT Travelers wishing to return to their home provinces wait at North Port terminal in Manila for passenger ships bound for Palawan and Cagayan de Oro on Friday, but some local governments across the country continue to restrict the entry of returning residents, fearing they may be carrying the coronavirus and cause a surge in infections in their areas. —RICHARD A. REYES

It reestablished border controls, revived checkpoints and stepped up the tracing of persons who came in contact with COVID-19 patients here. The city had 12 COVID-19 cases as of June 25.

In Romblon, Gov. Jose Riano placed the three towns of San Fernando, Magdiwang and Cajidiocan on Sibuyan Island under a lockdown after a stranded person tested positive for the virus.

He imposed movement restrictions effective 10 a.m. on Saturday and directed the towns to stop accepting stranded persons returning to the island “until further order.”

Oriental Mindoro Gov. Humerlito Dolor also announced that stranded persons and repatriates won’t be allowed entry into the province from July 1 to July 7.

He said it has been one month since the province had a confirmed COVID-19 case when a couple, both 58 years old, who were stranded in Cavite province arrived at Calapan port on June 1.

The man, who died on June 20, was the 25th and the woman was the 26th COVID-19 case in the province. The woman is asymptomatic and is scheduled for a repeat swab on Monday.

“All those who are holding travel authority and updated medical clearance certificate that they are non-COVID persons and wanting to return to Oriental Mindoro are advised to travel before the suspension period,” Dolor said.

In Quezon province, the municipal government of the island town of Alabat will also temporarily stop the return of stranded individuals starting on Sunday after it recorded five cases in just a week.

The local government explained that the town’s isolation facility had limited capacity.

In Iloilo City, Mayor Jerry Treñas ordered all returning OFWs and stranded residents to undergo a 14-day quarantine in designated facilities instead of undergoing home quarantine.

They will also be subjected to reverse transcription-polymerase chain reaction tests instead of rapid tests, which are considered less reliable.

Treñas tightened the quarantine measures after receiving reports that some of those supposed to be on home quarantine were going out and visiting public places.

Nearly two-thirds of COVID-19 cases in Western Visayas are repatriated OFWs and stranded residents who had returned in recent weeks, the Department of Health (DOH) regional office said.

On Wednesday, it reported 25 new cases, all former stranded persons, the biggest number recorded in a day.

The region on Saturday had 228 cases, with 145, or 63 percent, of them former OFWs and stranded persons. 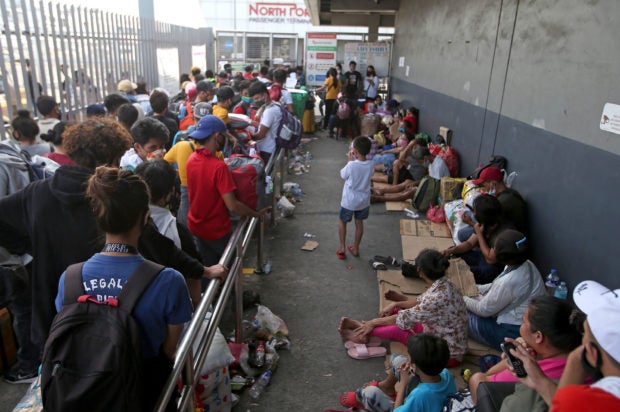 LONGER WAIT Scores of people waiting for a boat ride to get back to their home provinces after being stranded in Metro Manila for four months due to the COVID-19 pandemic may have to wait longer as several provinces announced they would not accept returning residents for fear that they might carry the new coronavirus. —RICHARD A. REYES

On June 22, Caraga’s IATF imposed a 13-day moratorium on the return of residents back to the region.

Caraga leaders believe the moratorium could stem the rise in the number of infections in the region, which surged from only eight cases three weeks ago to 116 on Friday.

The new cases were mostly returnees. So far, 5,994 had returned to the region.

Philippine Economic Zone Authority director general Charito Plaza, who helped some 2,200 to travel home to Caraga, said she was disheartened by the sudden halt to the “Hatid Probinsya” program.

She said there are still over 500 Caraga residents stranded in Metro Manila and Cebu.

Plaza, who is from Butuan, criticized local officials for blaming the spike of COVID-19 cases on the program, saying they were just using this as an excuse for being unprepared for the return of their own residents.

She said it was “unfair and unfounded” to simply characterize the returnees as “COVID-19 carriers.”

“From the very start most local governments in Caraga never wanted [OFWs] and [stranded persons] to go home so that there [was] never a show of interest and concern for their sad plight,” she said.

Plaza noted that of the 1,311 returnees from May 26 to June 20 only 18 tested positive for SARS-CoV-2, the virus that causes the severe respiratory disease.

Not the right answer

Dr. Adriano Suba-an, northern Mindanao’s health chief, said the rise of COVID-19 cases in the region was mainly attributed to the influx of returnees, but added that refusing to welcome the stranded residents back home was not the right answer.

Suba-an said a possible surge in cases could be addressed by having local governments prepare so-called temporary treatment and monitoring facilities where returnees will be isolated and observed for symptoms of the disease.

“We have to contain it (virus), we have to manage it. We have to show more compassion to promote and preserve human dignity,” Suba-an said.