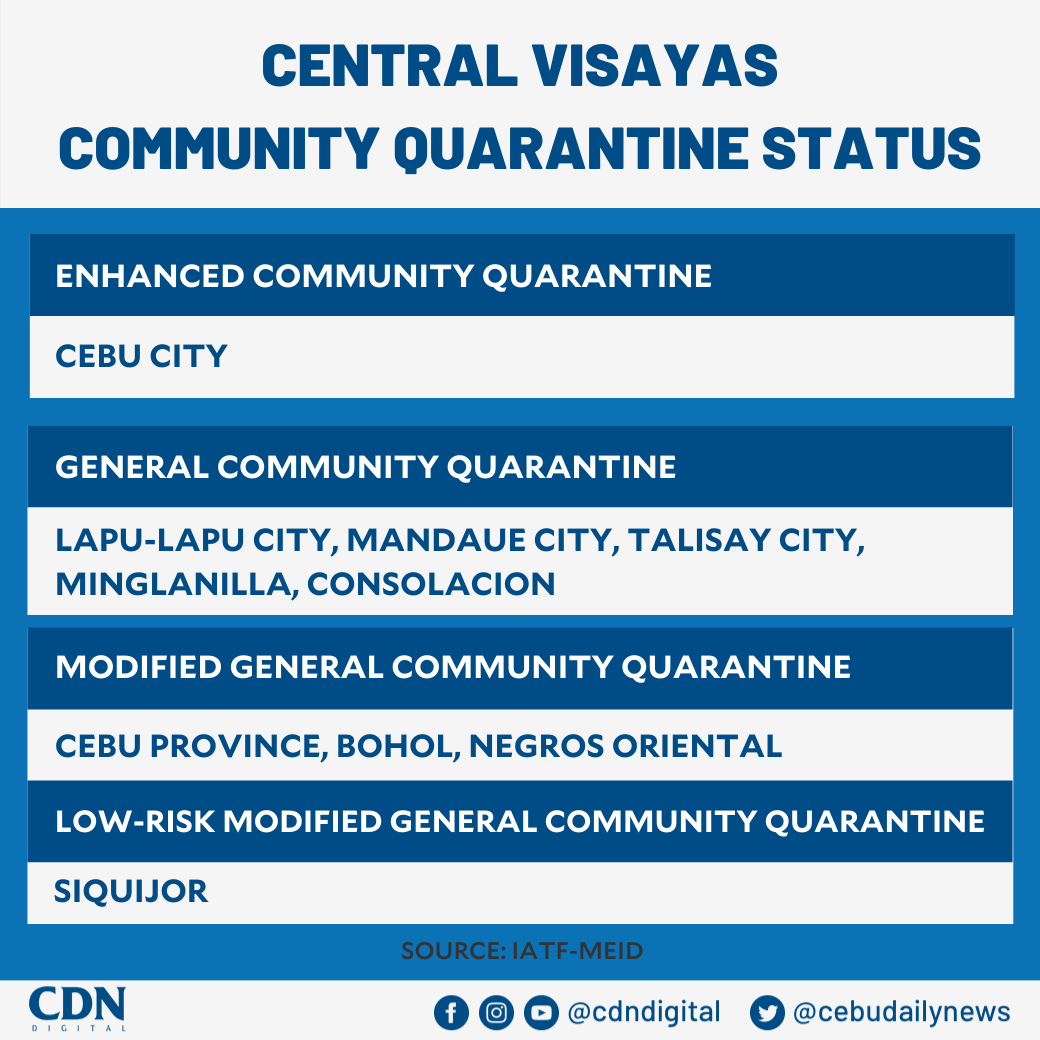 The community quarantine status of the provinces and highly urbanized cities in Central Visayas, as announced by Health Sec. Francisco Duque III on July 1, 2020. Cebu province, sans the city of Talisay and municipalities of Minglanilla and Consolacion, is now under MGCQ.

CEBU CITY, Philippines — Cebu province, except for Talisay City and the municipalities of Minglanilla and Consolacion, is now under a modified general community quarantine (MGCQ).

This was announced by Health Secretary Francisco Duque III in a televised presser with President Rodrigo Duterte at midnight this July 1, 2020.

Cebu province has appealed at least twice to be downgraded to MGCQ from its previous status of general community quarantine.

Talisay City, Minglanilla, and Consolacion, on the other hand, remain under GCQ, alongside the highly urbanized cities of Mandaue and Lapu-Lapu.

The three local government units have the most number of coronavirus disease (COVID-19) cases in the province.

Minglanilla has 174 confirmed cases, with 8 deaths and 85 recoveries.

Consolacion, on the other hand, ended June with 7 new cases, 4 recoveries, and 2 deaths, bringing its total number of cases to 147. Of the number 90 are active cases.

Cebu City, which is now considered as the epicenter of the COVID-19 transmission, is the only area in the country that remains under enhanced community quarantine (ECQ).

Read: Cebu City to remain under ECQ until July 15

Data from the Cebu City Health Department says that the city has a total of 5,494 COVID-19 cases but the Department of Health in Central Visayas’ case bulletin as of 5 p.m. on June 30 shows that the city already has 6,024 cases. The city ended June with 353 new cases.

Aside from Cebu province, the provinces of Bohol and Negros Oriental are also placed under MGCQ.

Siquijor, which remains with no COVID-19 reported cases to date, is distinctly classified as a low-risk MGCQ area.

Negros Oriental, on the other hand, now has 13 active cases out of its 32 confirmed cases. The province logged two deaths. /bmjo

Read Next
Cebu City to remain under ECQ until July 15