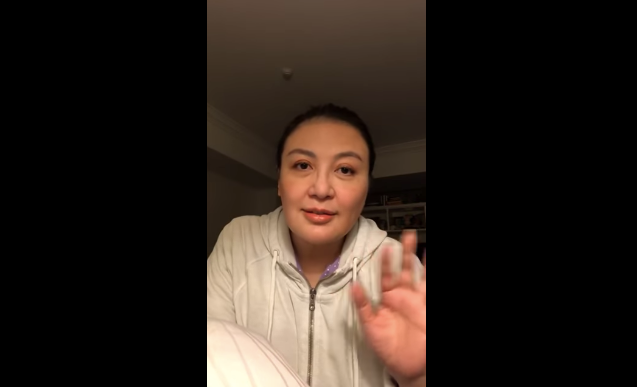 Days after being upset and outraged by a netizen who threatened her daughter Frankie Pangilinan, the Megastar made a 45-minute Instagram Live video recently and somewhat vented her frustration on what has become of the country and some of its people.

“I don’t know what’s happened to our country,” she uttered in the June 29 video that addressed a number of issues, which she said came out in social media lately.

“I hope VP Leni runs for president next time dahil hindi na rin makakatakbo si Tatay next time. One term lang ‘di ba,” she added, referring to Duterte, who is called “Tatay” by many.

(I hope VP Leni runs for president, next time because “Tatay” can’t run anymore. He can only have one term, right.)

(I hope VP Leni wins should she run. Maybe most of our people would become decent again.)

‘Apolitical’ Sharon opens up on politics

The Megastar, who is the daughter of long-time Pasay City Mayor Pablo Cuneta, shared that despite her father being in politics, she said she was “apolitical” for a time.

But in a rare moment, Cuneta opened up her views on politics, even admitting that she campaigned for Robredo in the 2016 national elections.

Further, Cuneta opened up how she has “always been good at separating politics from friendships and relationships.”

Aside from being the daughter of a mayor, Cuneta is also the wife of Senator Francis “Kiko” Pangilinan, an opposition legislator and one of the fierce critics of the Duterte administration. Frankie, 19, is the eldest daughter of Pangilinan and Cuneta.

The singer-actress then talked about how she deals with situations where Duterte slams her husband Kiko: “So ‘yung asawa ko minsan, masasakit na ‘yung salita nung Pangulo against him, pero hinahayaan ko lang kasi iniisip ko, they’re both politicians and so those are their issues.”

(So my husband sometimes, the President throws harsh words against him. But I just let them be because, in my head, they’re both politicians and that’s their issues.)

Cuneta also noted her relationship with the President and his daughter, Davao City Mayor Sara Duterte-Carpio.

(The President treats me like I’m his own daughter, o the point that he even calls me “the singer of my life.” Then I love Inday Sara, because she has been a Sharonian ever since she was little.)

Cuneta then touched the issue involving daughter Frankie, who was the subject of a rape-threat on social media by a supposed supporter of Duterte.

Prior to this rape-threat by a netizen, Frankie fired back at TV personality Ben Tulfo for his comments that women should watch what they wear in order for them not to be harassed.

“I am very angry,”  Cuneta said as she couldn’t contain her anger./END