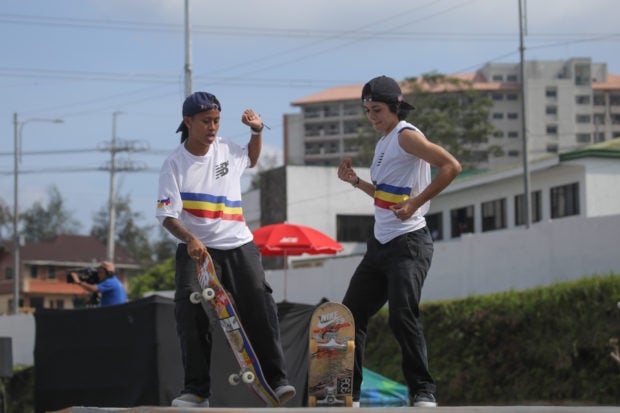 Filipino skateboarders Christiana Means (right) and Margielyn Didal (left) before the finals of the street skateboarding match of the 2019 Southeast Asian Games held at the Tagaytay Extreme Sports Complex. | Photo by Earvin Perias

Team Philippines’ bid to win a second straight overall title in the Southeast Asian Games took a big, big punch in the gut after Vietnam, the host of the next staging of the biennial event next year, released a list of just 36 events that struck off 15, which Filipinos dominated last year on the way to winning a record 149 gold medals.

“It would be very difficult. It certainly looks bleak,” Philippine Olympic Committee (POC) president Abraham “Bambol” Tolentino told the Inquirer on Sunday after a videoconference with SEA Games Federation members where he officially turned over the hosting rights to Vietnam. “It’s a right the host enjoys.”

Olympic sports like triathlon, which touched off an avalanche of triumphs for the Filipinos right on the first da in Subic last year, has been stricken off the list together with sailing, rugby sevens, skateboarding, modern pentathlon, surfing and medal-rich arnis for the 31st SEA Games next year in Hanoi.

“I will definitely lobby for the inclusion of sports where we have strong chances of winning golds,” Tolentino said.

But Tolentino, also the PhilCycling head and representative of the eighth district of Cavite province, admitted that it will be an uphill climb for all the countries seeking to include sports where they are strong at.

“It’s a tough process where you have to have a majority [among the member countries] to be able to include an event,” Tolentino said. “I believe that I would be lucky if I get to have two events [from the list of exclusions] readmitted to the roster of events.”

“Our athletes from these sports contributed heavily to the success of our hosting of the Games last year,” said Tolentino, who can file his appeal in the next SEA Games Federation meeting on July 21-22.

Team Philippines won a total of 56 gold medals from those sports that were excluded and there are a lot of Filipinos who have unmatched talent in their respective fields, like Kim Mangrobang in women’s triathlon and skateboarder Margielyn Didal, who is actually seeking a berth in the Tokyo Games next year.

“Retaining the overall title is going to be difficult, but I assure you we will be highly competitive,” Tolentino said.

The Filipinos won 14 gold medals in arnis, the Philippines’ national martial art, six each in skateboarding and obstacle racing and a chunk in those water sports.

Vietnam was a badly beaten second last year with 98 gold medals, and its chances of reclaiming the title on their soil certainly look bright at this point, though Tolentino vowed to come up with what will be a leaner but mean delegation that will try to pull off the impossible in Hanoi from Nov. 21 to Dec. 2 next year.

“As long as we don’t restrict the number of athletes that we will bring, we will give them a good fight,” Tolentino said. “We are looking at around 500 to 600 athletes and it will be better if we can have entries in every event.”