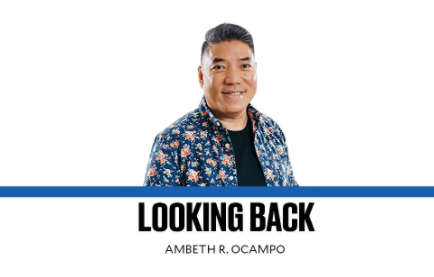 The threat to deploy police house-to-house to forcibly take COVID-19 positive people from their homes and bring them to government isolation centers was the latest in disturbing news we don’t need during a pandemic. Shouldn’t we send health workers instead of police in fatigues carrying long arms? Why the dragnet after our stressed-out health secretary just announced that the Philippines “has flattened the curve”? He retracted that claim within the day and said he meant “bent,” not “flattened.” Duh.

While most people think the Philippine National Police’s announced search for COVID-19 positives is another form of “tokhang,” perhaps we should look back to history beyond Marcos and martial law, to Hitler and the extermination of the Jews. Adding to the bad news was the notice that the activist Susan F. Quimpo had passed away. Her last and most moving soundbite came in the wake of the opposition against the Marcos burial in the Libingan ng mga Bayani, when she declared: “Buti pa si Marcos may bangkay…,” referring to her brother who disappeared during the dark days of martial law, believed to have been killed by the military. How, indeed, can one have closure and mourning without a corpse?

There is no better time than now to get hold of “Subversive Lives: A Family Memoir of the Marcos Years,” which Susan coauthored with her brother Nathan Gilbert Quimpo. Do not be put off by its 468 pages, because it is actually hard to put down. I finished it in one sitting. “Subversive Lives” is a compilation of essays, neatly arranged into thematic and chronological chapters that can, however, be read in any order, each essay complete in itself, with a beginning, middle, and end. Lucidly written, the narratives from different points of view reminded me of the proverbial blind men trying to describe an elephant from the various body parts each one had at hand: tusk, trunk, ear, body, leg, tail, and penis. One can even say the book is like different strands of raw silk, irrelevant and monochromatic by themselves, but woven together transform into a vibrant tapestry brought together by one big family’s experience of a period in history variously referred to as the Marcos years, the martial law years, the Marcos (conjugal) dictatorship, or the Marcos regime, depending on who is telling the story.

The Quimpos have left us with personal views of martial law, written years after, when memory casts a soft light on even the most horrendous experiences of abuse of power, corruption, torture, summary execution, and murder—on a scale of impunity we are starting to see again in our day. It should be read by the youth, who have been raised to think physical books are obsolete. They have no patience and discipline for a long read, having come of age with abbreviated txt on their smartphones, or the 114 characters that make up a tweet. The Quimpos, through their memories and reflections, provide us with one more primary source to counter the growing misinformation and slick full-production fake news that have been flooding social media. After three decades of post-Edsa historiography, the Marcoses are making a comeback, asking people to move on and forget. If not checked, the Marcos propaganda and revisionism may one day hog the top of internet search results, drowning out the truth that commands us not to forget and #neveragain.

Some years ago, I found out that the Marcos Foundation published books carrying reassessments of the Marcos years. You don’t see them in bookstores, not even in bargain bins, because copies were donated to libraries where they will sit like land mines to trip the unwary reader in the future. Despite the Bantayog ng mga Bayani and an online Martial Law Museum, we need more truth-telling like those shared by the Quimpos, which makes real and gives a human face to a clear and present evil that has been summarized, bowdlerized, and emasculated for use in K-to-12 textbooks.

As history is written and rewritten by different historians, all rely on primary source material like memories preserved in tangible form, in print, audio, video, and art. In “Subversive Lives,” the Quimpos are narrators coming to terms with the past and taking us along with them in their long and painful journey. Today, more than ever, we need more accounts of the martial law years, for without these we won’t have history. Echoes of Marcos and martial law are being felt in our time, a nightmare we can only hope to wake up from—soon!