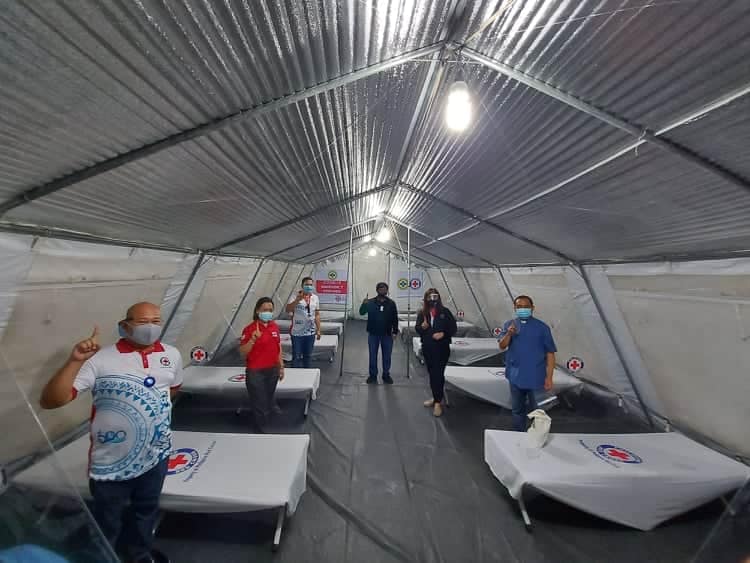 Scenes during the blessing of the medical tents donated by the Philippine Red Cross to the city government of Lapu-Lapu as an expansion of the city hospital. | Photo Courtesy of Mayor Junard Chan

CEBU CITY, Philippines — The Philippine Red Cross Lapu-Lapu/Cordova chapter has donated two medical tents to serve as an expansion of the COVID-19 beds of the city government-owned Lapu-Lapu City Hospital.

On Tuesday, July 28, 2020, Lapu-Lapu City Mayor Junard Chan lead the blessing of the PRC Medical Tents. Each tent has 12 beds.

Chan, who earlier expressed concerns that the health care system in the city is already overwhelmed with the coronavirus disease (COVID-19) cases, said the extra 24 beds is already a huge help for the hospital’s management of its patient.

(We can now segregate patients at the Lapu-Lapu City Hospital, the ones with mild symptoms, moderate, and asymptomatic, and especially those giving birth.)

While the COVID-19 cases in the city has already hit over 1,500, Chan said that its declared recoveries have also gone past 900, thus, its recovery rate is at about 60 percent.

Chan added that a team from the city will immediately visit those who will report their condition so their needs will be taken care of and they won’t be exposed to other members of the community. /bmjo

Read Next
Pagasa warns of possible flooding, landslides as rains may last until Saturday