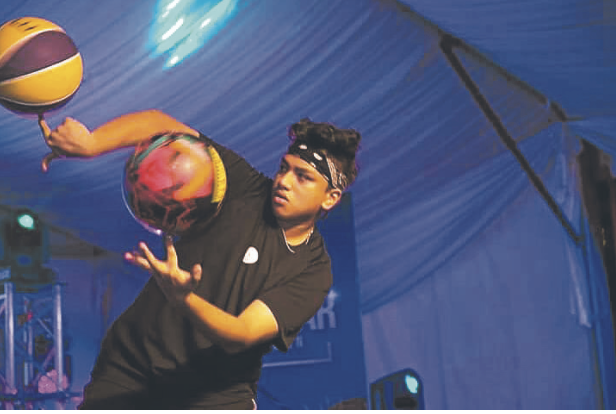 Scalia Nethanial headlined one of the featured presentations in the 2017 Southeast Asian Games in Bukit Jalil National Stadium in his hometown Kuala Lumpur.

There he delighted the crowd as he jumped, pranced and performed a handstand—all while spinning the basketball on his finger as techno-rap music blasted away.

“Little did they know I’m more of a Filipino,” Nethanial told the Inquirer in straight Tagalog. “I was cheering for the Filipino athletes back then.”

Born to a Malaysian father and a Filipino mother who hails from Dumpay, Pangasinan province, Nethanial has gained measure of popularity in Malaysia as its top freestyle basketball artist.

He has appeared on TV shows in Malaysia and performed around the world carrying an international athletic brand as its ambassador and brand executive.

He has collaborated with renowned streetball artists Grayson “The Professor” Boucher and Philip “Hot Sauce” Champion.

But mainstream fame continues to be elusive for Nethanial in his father’s country, especially since Malaysia is far too much into football compared to basketball.

Which is why he is focused on making a name for himself in the land that is home to the other half of his identity.

“Given the chance, I’d like to become known in the place of my birth,” said Nethanial, who was in the Philippines doing shows just before the pandemic broke out.

“In interviews I always talk about my Filipino roots and how basketball is the Philippines’ favorite pastime,” he added.

That pastime, however, is built on a reverence of a sport in its purest form. Freestyle basketball still has a lot of catching up to do in the country.

It may take some time for Filipino fans to warm up to basketball’s fancy subculture, but Nethanial is willing to give it a try.