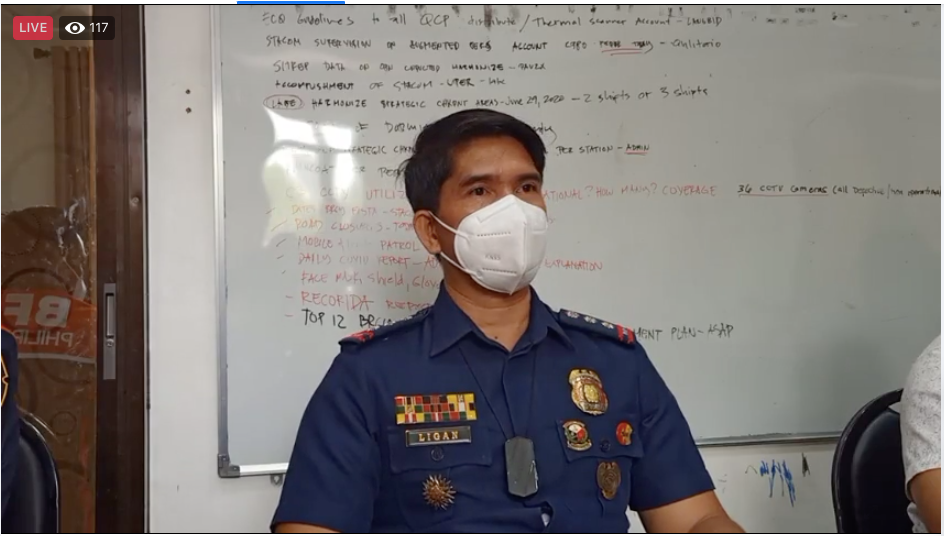 Police Colonel Josefino Ligan, chief of Cebu City Police Office (CCPO), announces the creation of a multi-agency task force that will especially man peace and order in the different cemeteries in the city during All Saints’ Day and All Souls’ Day.

CEBU CITY, Philippines– Police here are planning on creating a multi-agency task force that will watch over cemeteries in the city in the days leading to All Saints’ Day and All Souls’ Day.

In the press briefing on Wednesday, September 23, 2020, Police Colonel Josefino Ligan, director of Cebu City Police Office (CCPO), said they have not yet finalized this plan since they still have a number of factors to consider.

The initial plan is for the task force to watch over cemeteries and ensure that they comply with health protocols set by the government to help stop the spread of the coronavirus disease (COVID-19).

Cebu City Mayor Edgardo Labella has already announced that cemeteries will be closed to the public from October 30, 2020 to November 3, 2020, or during the period of “Kalag-kalag.”

Read: Cemeteries in Cebu City closed from Oct. 30 to Nov. 3

Those who wish to visit their departed loved ones can do so before or after that period but they will have to comply with health protocols such as wearing of face masks, observing social distancing, and washing of hands. Cemeteries are also allowed only to accommodate visitors up to 30 percent of its capacity.

One of the factors that the police here are still discussing is identifying how many police officers and task multipliers will be deployed in some areas, especially those cemeteries situated in between a number of barangays.

“We are still identifying those big cemeteries, public cemeteries, comprising many barangays. So that we will be focusing on those areas so we can deploy more people in those areas,” said Ligan.

Ligan also said that they are still determining the sizes of cemeteries since all of them differ in size and location, making their capacity different from one another. This is important to also know the number of police to be deployed and to determine how much is 30 percent capacity in each cemetery.

Read: Labella on order to close cemeteries for Undas: ‘It is for the safety of the public’

“We are having a challenge on how to implement the 30 percent (capacity). Because we don’t have a baseline as to how many numbers or how many people can that cemetery accommodate,” he added.

According to Ligan, they might be proposing a different scheme in ensuring the health protocols in the city during this season but will still be inlined with the protocols and orders given by the city government.

“We’ll be proposing, I guess, another scheme, just to maintain [safety]. After all, our intention is always to abide with [the] minimum health standards, “ he added.

Another meeting is expected to be held later on Wednesday, one in which they will be addressing these issues so they can finalize  their deployment as early as Saturday, September 26.

Read: Masses with no attendees may be held in cemeteries on Undas