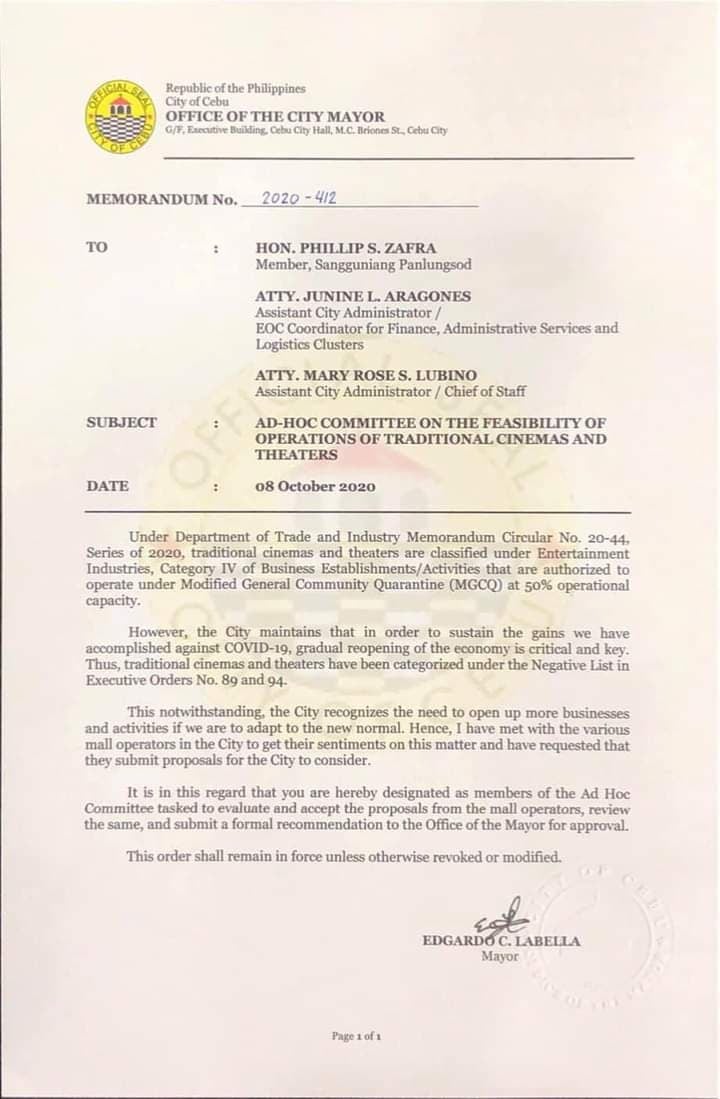 CEBU CITY, Philippines — As a step forward to the reopening of more establishments, Cebu City Mayor Edgardo Labella has formed an ad hoc committee that will study how cinemas and theaters may open under the modified general community quarantine (MGCQ) and the new normal.

This came after three malls pleaded to the mayor to reopen the cinemas under a limited capacity as cinemas are generally allowed to open in areas under MGCQ.

In a phone interview with CDN Digital, Labella said that there was a necessity to study the reopening of the cinemas because the city has to prevent another rise of the Coronavirus Disease 2019 (COVID-19) cases.

Their main task is to study the proposals of the mall owners and craft guidelines on how it may be possible for the cinemas to reopen, especially since these are closed spaces and air conditioned.

It can be noted that the Emergency Operations Center (EOC) expressed concerns about the reopening of movie houses due to the lack of natural ventilation, which would make it susceptible to the spread of the coronavirus.

Read: EOC asks Cebu City mayor not to allow reopening of cinemas yet

Councilor Joel Garganera, the deputy chief implementor of the EOC, suggested to mall owners to try drive-through or outdoor cinemas instead.

However, the mayor said that this request from the business sector should be looked into as there may be ways to allow the cinemas to operate under strict protocols.

“The role of the government is to listen to the stakeholders. We should be objective. We need to listen so we can make the right decision, but it does not follow that we have to heed their request immediately,” Labella said.

“That is why I formed a task group to study if and how we can reopen the cinemas. We have to be open-minded. Nobody can claim a monopoly of knowledge,” he added.

The mayor assured the public that cinemas will open only if there are guidelines laid out for the health and safety of the public.

Read Next
Get ready for BaiCon InFest 2020!