Signal No. 1 raised in 19 areas due to Tropical Depression Tonyo 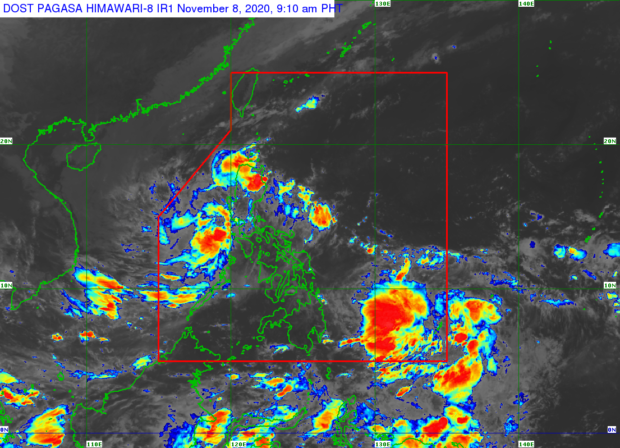 MANILA, Philippines — Tropical Cyclone Wind Signal (TCWS) No. 1 was raised over 19 areas in Luzon, including Metro Manila on Sunday morning due to Tropical Depression Tonyo, according to the Philippine Atmospheric, Geophysical and Astronomical Services Administration (Pagasa).

Below are the following areas placed under TCWS No. 1, based on the severe weather bulletin issued by Pagasa at 8 a.m.:

Pagasa said areas under TCWS No. 1 are currently experiencing or will experience “strong breeze to near gale conditions with occasional gusts” throughout the passage of the tropical depression.

It added that the northeast monsoon will also bring strong breeze to near gale conditions over Batanes, Babuyan Islands, Ilocos Norte, Apayao, and the northern portion of mainland Cagayan.

It was moving west-northwest at 25 kilometers per hour (kph) and has maximum sustained winds of 45 kph near the center and gustiness of up to 60 kph.

Pagasa said the center of Tonyo made landfall over Torrijos, Marinduque at 4:30 a.m. today. It was also forecast to move west-northwestward and make landfall in the vicinity of Sariaya, Quezon or San Juan, Batangas.

“On the forecast track, Tonyo will emerge over the West Philippine Sea this morning or afternoon and exit the Philippine Area of Responsibility (PAR) tomorrow morning,” the weather bureau added.

“Mariners of small seacrafts are advised to take precautionary measures when venturing out to sea. Inexperienced mariners should avoid navigating in these conditions,” Pagasa said.

The northeast monsoon will bring rough to very rough seas (2.5 to 4.5 m) over the seaboards of Batanes, Ilocos Norte, and Ilocos Sur and the northern seaboard of Cagayan including Babuyan Islands.