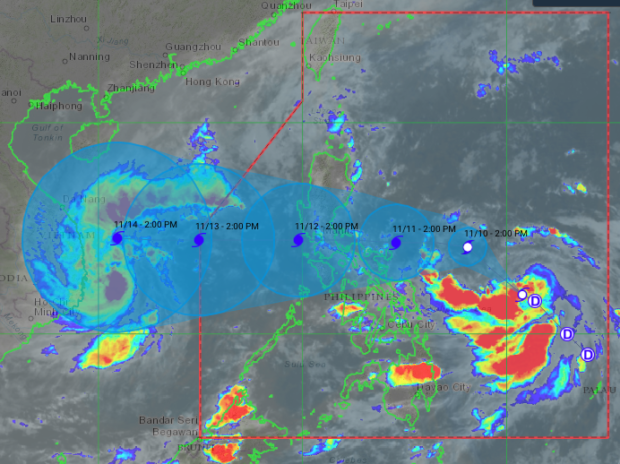 MANILA, Philippines — As Tropical Storm Ulysses intensified on Monday afternoon, its latest predicted track showed a high possibility that it would hit the Bicol Region and Southern Luzon before directly moving to Metro Manila.

According to the Philippine Atmospheric, Geophysical and Astronomical Administration (Pagasa), Ulysses’ trough is already bringing cloudy skies and light rains in Bicol Region as of now.  But as it nears landmass, it may start bringing heavy rain to Eastern Visayas, Bicol, and Southern Luzon.

As of now, it was last spotted 575 kilometers east of Borongan City in Eastern Samar, packing maximum sustained winds of 65 kilometers per hour (kph) and gustiness of up to 80 kph.  It is moving northwest at a speed of 15 kph.

Depending on its pattern, it may hit Metro Manila as a typhoon.

Pagasa expects that it would move closer to Bicol Region by Tuesday afternoon, at around 555 kilometers east of Daet, Camarines Norte.  It would then make a turn toward the east — probably as a typhoon, placing it 320 kilometers east of Infanta, Quezon, and very close to Catanduanes province.

It is expected to make landfall between Wednesday and Thursday morning over Bicol, a region that sustained extensive damage after Super Typhoon Rolly pounded the area last November 1.

By Thursday afternoon, Ulysses would have crossed the country’s landmass, moving across Metro Manila as it would only be 130 kilometers west of Pasay City.

However, Pagasa clarified that Ulysses’ forecast track still has a wide range, which means that it may veer south which places it directly over Catanduanes or even Eastern Visayas, or moves north toward Aurora and Central Luzon.

The state weather bureau’s predictions also showed that Ulysses may remain a typhoon despite crossing Luzon’s landmass and as it exits the Philippine area of responsibility (PAR) by Friday night.

As of now, gale warnings have been raised over the whole Ilocos Region, extreme Northern Luzon, and Cagayan Valley due to the northeast monsoon or Amihan, and at the coastlines of eastern Catanduanes, eastern Albay, eastern Sorsogon, northern and eastern Northern Samar, and eastern part of Eastern Samar due to Ulysses’ threat.

Boats cannot set sail on these areas as sea conditions may range from rough to very rough, which may be dangerous for seafarers. [ac]

Read Next
DOH-7: Cebu City has no signs of herd immunity