More areas under Signal Nos. 1 and 2 as Ulysses turns into severe tropical storm 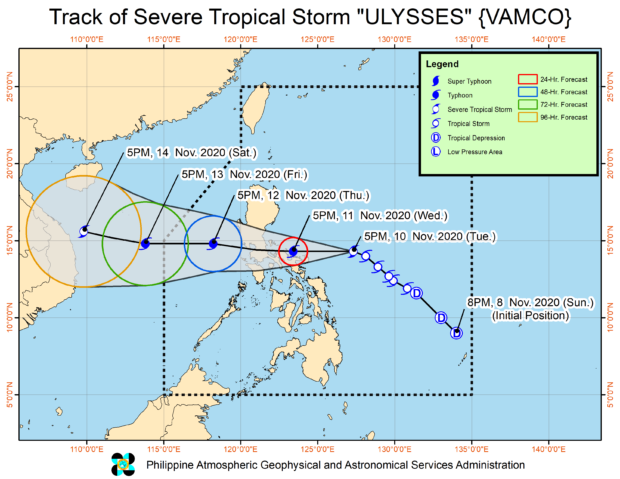 According to the latest severe weather bulletin, Ulysses now packs maximum sustained winds of 95 kilometers per hour (kph) near the center and gustiness of up to 115 kph.  It has moved closer to land, at 425 kilometers east of Daet, Camarines Norte.

It is still moving northwestward, at a slightly accelerated speed of 30 kph.

In addition, Pagasa has placed more areas under Tropical Cyclone Wind Signal No. 2, which means high-risk structures and those made of light materials may sustain light to moderate damage:

More areas were also added to the list of cities, municipalities, and provinces under Signal No. 1:

The latest forecast on the track of Ulysses indicates that it will hit land between Camarines Norte and the Quezon province area early Thursday morning, likely gliding near Catanduanes and other areas in Camarines Norte prior to landfall, Pagasa said.

It also said that due to favorable conditions, Ulysses may intensify as a typhoon by Wednesday morning, hence declaring Signal No. 3 in some areas remains possible.

Likewise, by Wednesday morning, Pagasa said rainbands of Ulysses are forecast to bring moderate to heavy rains in the Bicol Region, portions of Quezon, and Samar provinces.

Then by Wednesday afternoon, Ulysses is seen to be just 55 kilometers northeast of Daet, Camarines Norte, and cross Southern Luzon en route to the southern part of Metro Manila before it exits the landmass around Thursday afternoon, it added.