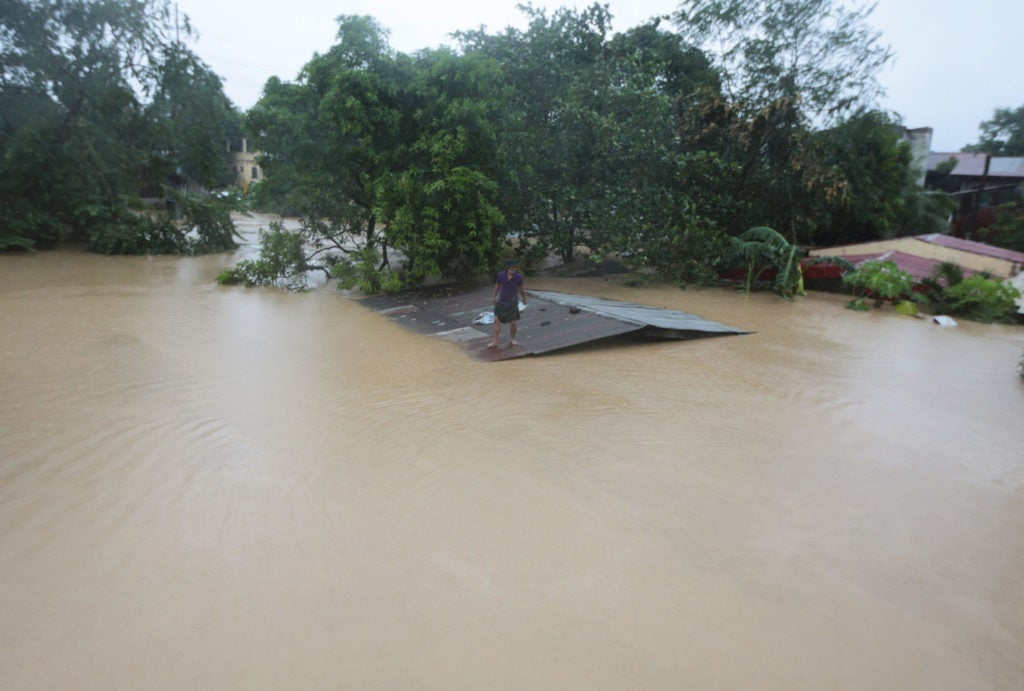 A resident scrambles on top of a roof of a house submerged in flood waters in Barangay Banaba in San Mateo, Rizal on Thursday, November 12, 2020. | INQUIRER PHOTO / GRIG C. MONTEGRANDE

Marikina City again was the hardest hit and the riverside Provident Village in Barangay Tañong was submerged once more in muddy water that reached the second floor of homes of the middle-class community on Thursday, November 12, 2020.

Many residents climbed to the roofs of their houses to escape the rising water, parents clutching their young children, all of them wet in the rain.

George Bolima, who moved to the residential subdivision three years ago, brought his family to the second floor of his house around 8 a.m. Fearing the steadily rising floodwater, and without food and water, he hoped for an early rescue.

“If the flood continues to rise, then we have nowhere else to go,” he told the Inquirer in an exchange of cellphone messages.

Bolima, who lived with his siblings, parents and a 2-month-old baby girl, said the floodwater began rising at 7 a.m. and in just an hour swallowed the entire first floor of his house.

“We know that we cannot all be rescued simultaneously here in Provident Village due to the high number of people calling for help. But we are hoping that the private sector can also help us,” he said. “We are afraid, the children are afraid. If the flood reaches us, we will have nothing left.”

Bolima could have run out battery hours later as he was no longer responding to the Inquirer’s messages.

According to Marikina Mayor Marcelino Teodoro, 223 people from Provident Village had been rescued as of 7 p.m. on Thursday.

He earlier told the Inquirer in a phone interview that around 9,800 other people were given shelter in the city’s 49 evacuation centers.

He said many people could not be accounted for by the local authorities because they had fled to the homes of relatives or friends in safer areas, or preferred to spend the night in their cars to wait for floodwaters to subside.

“All the memories of Ondoy came back to us,” Teodoro said. “We know that we did all we could to prepare for this typhoon, but this is an act of nature. We should take seriously the issues relating to climate change and really include [these] in our priority programs.”

The mayor admitted that his city’s resources were “overstretched” so he asked for rescue workers from the the national government.

He said he held a conference call with the National Disaster Risk Reduction and Management Council (NDRRMC) and the Philippine Coast Guard (PCG) late Wednesday night. Both agreed to deploy rescue teams to several villages that had been submerged.

But rescue efforts in Barangays Nangka, Tumana and Malanday were made difficult by the narrow village streets, the strong water current, and passageways blocked by electric wires that could already be grasped by hand due to the high water level.

The water level at Marikina River reached 22 meters at 11 a.m. on Thursday, a meter below its peak height during Ondoy, which dumped a month’s worth of rain over the metropolis in just a few hours.

According to the government weather bureau, Ondoy in October 2009 unleashed 341 millimeters of rain in six hours, and a total of 455 mm in 24 hours over Metro Manila. That was much more than the 153 mm poured by Ulysses in 24 hours.

The mean average rainfall in Marikina was 118 millimeters between 1 a.m. and 3 a.m. on Thursday, according to data collected from the city’s five monitoring stations.

Teodoro said the local government was employing a whole-of-community approach, which mobilizes people not affected by the typhoon to donate whatever they had from food and basic necessities to their expertise in various fields.

“We must also take into account the mental well-being of our countrymen because they were traumatized and stressed due to calamities. We need to help them recover and become productive,” he said.

Several boats had to be deployed to rescue stranded residents in Barangay Bagong Silangan, where the floodwater reached up to the waist in some neighborhoods. Some people in Vista Real in Barangay Batasan were brought to safety on an inflatable raft pulled by a jetski.

Engelbert Aposto, action officer of the city’s Public Affairs and Information Department, said 222 health workers were deployed to the temporary shelters so that proper health protocols were maintained.

Teams from the city’s Epidemiology and Disease Surveillance Unit were also dispatched to monitor the health status of evacuees, who were given hot meals or food packs.

Mindful of COVID-19, Mayor Rex Gatchalian of Valenzuela City said the city government had to open more evacuation centers to limit the number of people confined in a closed space.

A total of 415 families from villages near the Meycauayan and Tullahan rivers were brought to six shelters, Gatchalian said in an interview with the Inquirer.

The shelters were filled at 60 percent capacity, he said.

Aside from food, the families were given face masks and face shields to curb the transmission of the new coronavirus, which causes COVID-19.

Gatchalian noted number of families who evacuated was “more than the usual.”

“I guess it’s a good sign because people are more aware of being safe than sorry,” he said.

But many brought along their pets that the city government ran out of animal cages for them. Gatchalian said that it was a “lesson learned” for the city to procure more such cages.

The city was still on alert as the La Mesa Dam is at spilling level and the water in the rivers near Valenzuela was rising while heavy rains continued to pour on Thursday afternoon.

“Generally, we’re OK in the sense that we were prepared,” he added.

Valenzuela and Marikina were inaccessible to all types of vehicles because of the deep water on highways surrounding the cities on Thursday morning, according to the Metropolitan Manila Development Authority (MMDA).

Only boats could pass parts of North Luzon Expressway leading to Valenzuela and Tullahan bridge was under water, it reported.

Marcos Highway, which connects Marikina to Quezon City and Rizal province, was also submerged, it said.

Parts of major roads in Metro Manila were also impassable for hours until early afternoon on Thursday due to flooding.

Thousands of families from low-lying barangays in the cities of Taguig and Muntinlupa fled to various evacuation centers, as Laguna de Bay continued to swell.

Strong winds and waves slammed the 3,194-ton Peter Ronna, which was anchored on Manila Bay, against the seawall at SM Mall of Asia.

The MMDA appealed to local governments in the National Capital Region least affected by the typhoon to aid cities hard hit by Ulysses, especially Marikina.

MMDA Chair Danilo Lim said in a virtual meeting with the NDRRMC on Thursday that his agency had deployed two 692 of its personnel around Metro Manila and six rubber boats for rescue tasks in Marikina.

The MMDA said all its 64 pumping stations were operational.

On the other hand, about 250 Coast Guard personnel were deployed for rescue work in Metro Manila and in the nearby provinces of Rizal and Cavite.

The PCG rescue groups spread out to Marikina, and to Rodriguez and Montalban towns in Rizal with multipurpose vehicles, trucks and boats, including 41 brand new rubber dinghies.

The PCG assisted crew members of the motor tanker M/TRK Bulusan which crashed into a bridge in Navotas City due to big waves and strong winds on Thursday. No one was hurt.

Bungag said Ulysses caused only minimal damage at the Naia. –WITH REPORTS FROM MARIEJO S. RAMOS AND JEANNETTE I. ANDRADE

Read Next
A king’s ransom for Magellan’s men