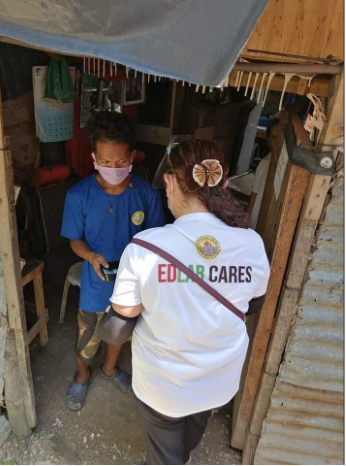 The financial assistance distribution to the Persons with Disability or PWDs in Cebu City starts on August 15, 2020. | Photo Courtesy of DSWS

CEBU CITY, Philippines -Just like the senior citizens, persons with disabilities (PWDs) will be asked to stay in their respective homes during the scheduled distribution of their cash aid from the Cebu City Hall from December 2 to 15.

In his Executive Order No. 107, Mayor Edgardo Labella said that government workers will be sent to visit the PWDs so that there will be no more need for them to go out and risk infection of the coronavirus disease.

Labella’s EO also directs recipients of the cash assistance to prepare their City Hall issued Identification Cards (IDs) and a ballpen which they will use in signing government documents to signify their receipt of the allocation.

An option is to authorize, through a signed letter, a member of PWDs family to receive the aid on his/her behalf.  The authorization letter should be presented with a photocopy of the PWD’s ID and a photocopy of the recipient’s valid ID.

Labella’s EO said that PWDs who already died between July and December will still be entitled to receive their cash aid.  However, the amount that they will be getting will only be computed until the time of their death.

This means that a PWD, who died in August, for example, will only be getting P2,000 that will represent his/her assistance for the months of July and August.

In this case, the assigned recipient will be asked to present the PWDs ID and a copy of his/her death certificate.

Cash assistance that will not be claimed during the distribution period, from December 2 to 15, will be forfeited in favor of the government.  The amount will be reverted to government coffers and will be made part of the general funds that may be allocated for another purpose.

Labella expressed hope that the city’s cash aid will help PWDs, who are now struggling from the effects of the pandemic, and help them in their Christmas celebration.

“Persons with disabilities are among the disadvantaged sectors in society. It is part of the City Government’s duty to see to the well-being of our PWDs,” he said. / dcb