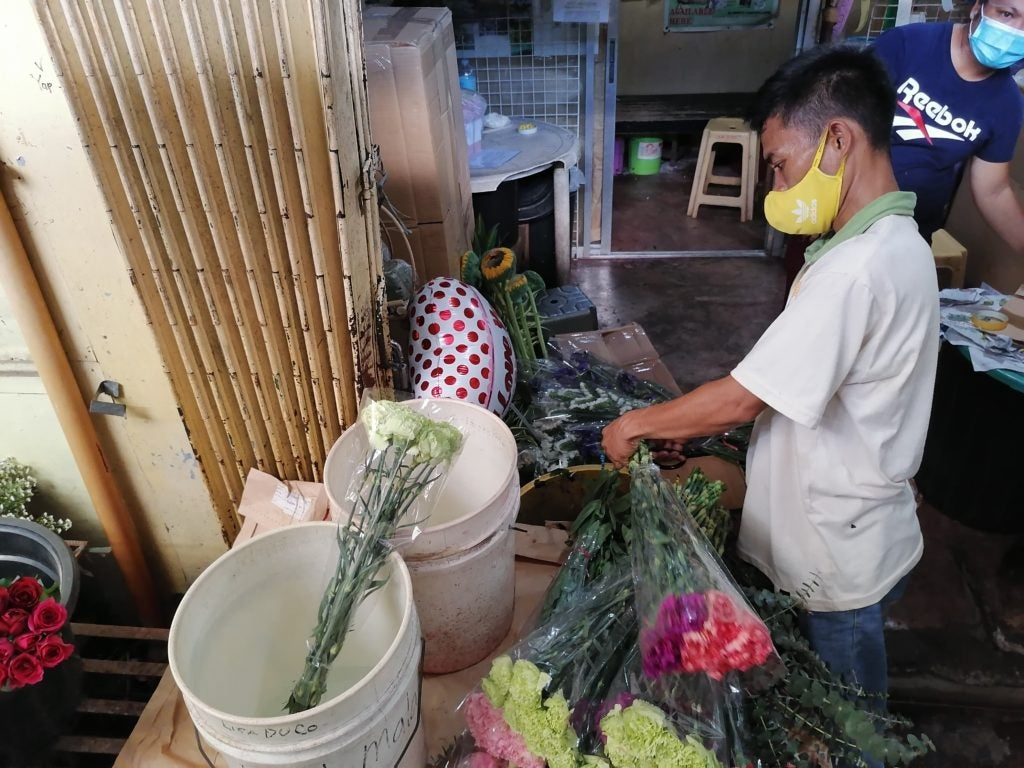 CEBU CITY, Philippines – A few days before Valentine’s Day, Freedom Park, which formed part of Cebu City’s Carbon Public Market, looks like it is closely returning to its pre-pandemic scene.

But behind the colorful flowers arranged meticulously and red, heart-shaped balloons signifying the start of the love season this February are vendors who continue to struggle to earn a profit as threats of the coronavirus disease 2019 (COVID-19) continue this year.

Among them were Jennilyn and Anthony Condino, a husband-and-wife tandem who has spent nearly half of their lives selling and arranging flowers for customers at the city’s most famous place for blooms.

The Condino couple’s love story even blossomed at Freedom Park as it was there where they first met.

Anthony, 37, came from Leyte and set foot in Cebu City last 2000 to look for greener pastures.

At that time, Anthony worked two jobs that both involved flowers – transporting them from the market to the docks and arranging them for stall owners.

Frequenting in Freedom Park, there he met his future wife, Jennilyn, a stall caretaker, who is now 32 years old.

Thirteen years married, the couple had three children and reside in Barangay Sirao, a village in the mountainous part of Cebu City dubbed as ‘Little Amsterdam’ for hosting popular tourist spots featuring no other than large fields of colorful blooms.

In previous years, the days leading to Valentine’s Day would usually find Jennilyn and her husband bury their heads in tall, unstemmed flowers, particularly roses, to create bouquets, as their shop entertains up to 10 orders in a day.

In a day, she said they can create at least five bouquets, and each order came with a price tag of at least P500, depending on the type and number of flowers, and other ornamental plants the customer wanted.

But on February 10, 2021, the couple were not making any bouquets. Instead, Anthony was just trimming the ends of flowers on display in the stall they occupy at Freedom Park.

Jennilyn, on the other hand, was guarding the cash vault as their employer went out for a brief errand.

The couple admitted that they may not have first-hand knowledge on the difference their shop earned every month before and after COVID struck here but said they can feel its economic pinch.

The couple also agreed that flower shops popping online, which provided convenience to customers, have joined forces with the pandemic as threats to flower sellers in Freedom Park.

Other flower vendors also shared the same struggles with the Condinos.

Based on reports from local authorities, there are over 2,000 vendors in Freedom Park which is home not only to flower vendors but those who trade and sell locally manufactured goods, vegetables, and even ready-to-eat food.

One of them is Lisa Codera. Lisa, 42, would have spent most of her time picking up the exact kind of flowers for the bouquets their customers ordered.

Lisa, who is from Nivel Hills in Barangay Lahug, added that customers ordering bouquets of flowers for any occasion are hard to come by.

This prompted her employer, she said, to sell flowers per stem.

Worsening the situation among flower vendors was the fact that the pandemic led some flower farmers in Barangay Sirao to take a break.

As a result, Lisa and the Condinos’ bosses resort to importing flowers from Manila, Leyte, Bukidnon, and to some extent, from foreign countries such as China.

In today’s Carbon, one can buy a single stem of sunflower grown in Bukidnon at P200, and a half-dozen carnation, harvested all the way from China, at P300 as its cheapest. 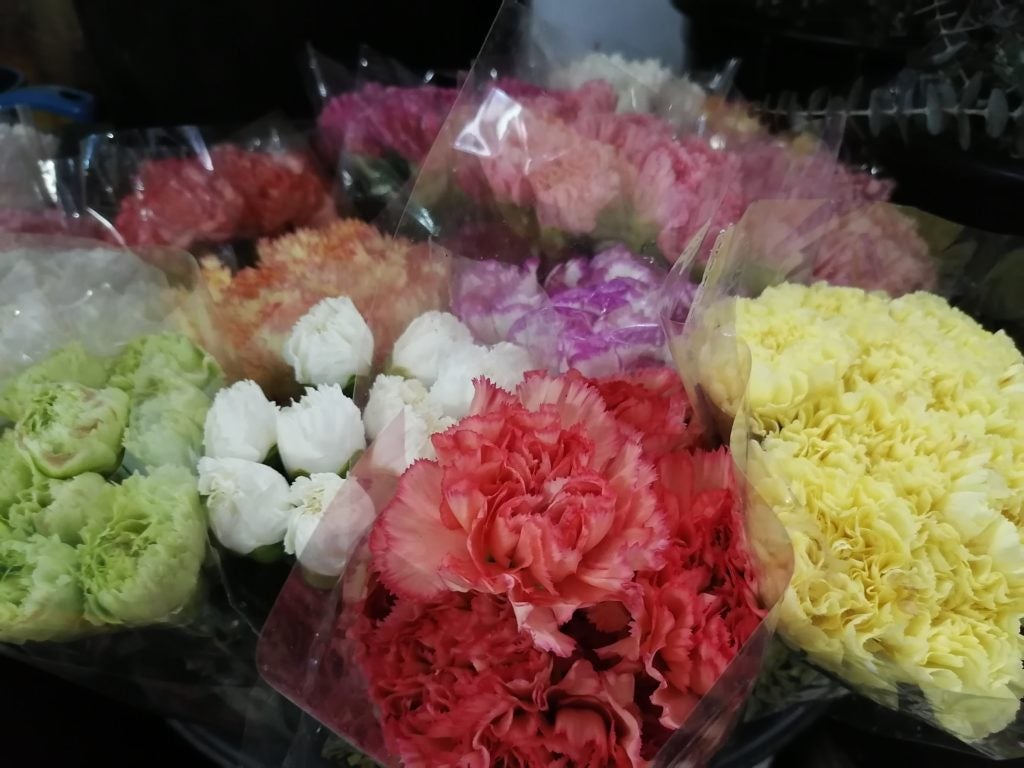 White and pink roses and lisianthus surrounded by half-dozen carnation flowers in various colors are being sold at Freedom Park in Carbon for P350 per bunch. | CDN DIGITAL PHOTO by Morexette Marie Erram

Vendors also command higher prices for rarer flowers such as orchids which can be bought at P250 and lisianthus at P350.

Except for roses from Luzon that last up to three days only, most of these flowers will not wilt until two to three weeks, said Lisa.

Vendors have no choice but to throw flowers aside once they are no longer in their desirable condition, and flowers inside garbage bags and cans meant losses.

Despite all of these, Lisa, Jennilyn, and Anthony remained hopeful that sooner things would be brighter and more colorful for flower vendors like them.

For one, Anthony said he enjoyed having to arrange flowers as his means of livelihood.

Read Next
Chot Reyes back as TNT head coach