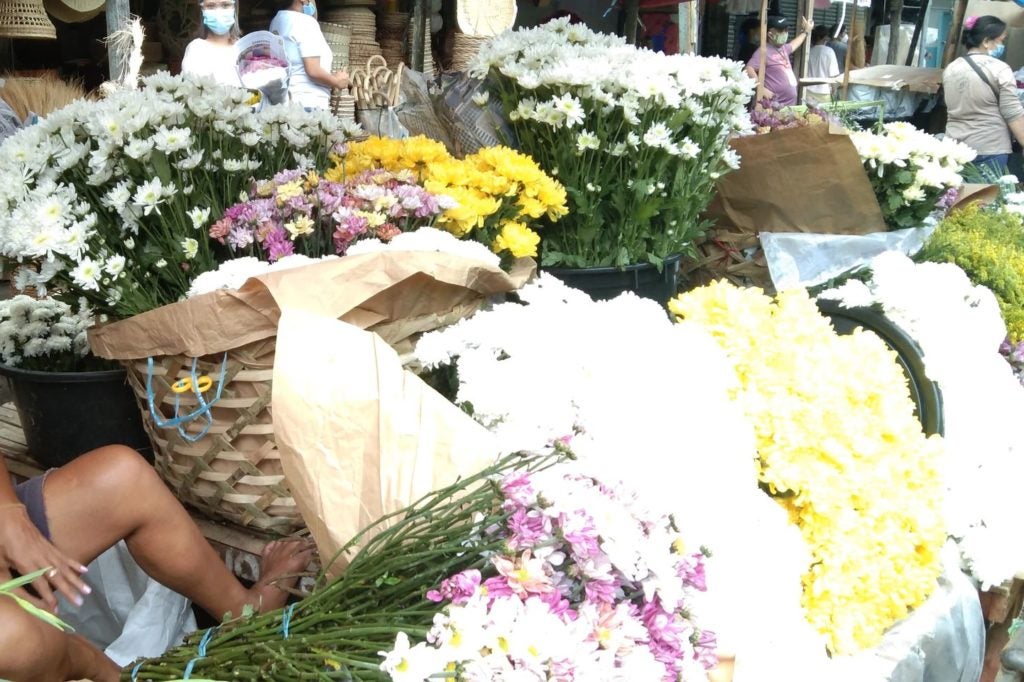 Flowers in Freedom Park remain unsold due to lack of customers over the closure of the cemeteries. | Delta Letigio

CEBU CITY, Philippines — Vendors at the Freedom Park are urging the public to buy their flowers despite the closure of the cemeteries starting October 29 to November 3, 2020.

Deling Navarro, 55, a resident of Barangay Sirao, told CDN Digital, that their sales had dropped massively this year because of the restrictions.

When in the past years, they have been earning up to P10,000 per day, now they are lucky to sell flowers worth P1,000. Yet the price of the flowers from Sirao and other areas in the country has not dropped with it.

“Lisud kaayo gyod kay wala gyod miy halin. Sa una, karon pa lang hurot-hurot an among baligya. (It’s so difficult because we don’t have sales. Before, our flowers are already sold out by now),” said Navarro.

Navarro has been selling flowers in Freedom Park for over 40 years, but the pandemic has been the most difficult year for her businesses.

She lost her spot at the front of Freedom Park because she couldn’t go to the city center due to the lack of transportation and restriction in movement.

The last six months was a difficult time for her family as they lived off that land just to survive.

Similarly Mila Enesola, 55, hailing from Barangay Bonbon also saw a significant decrease in sales this year. She said her shop would be lucky to sell up to P1,000 per day this year.

“Wala gyoy moanhi kay dili man kasulod sa sementeryo, paet gyod kaayo. (Nobody would buy here because no one can get in the cemetery, it is difficult),” said Enesola.

Most of the flower shops in Freedom Park has complained of lack of customers and lower sales in the past days. They said they expect zero sales from October 29 to November 3, 2020, when all cemeteries were closed.

The vendors likened the situation to a “salt added to injury” as they, too suffered through the long quarantine, and yet on the days they were supposed to regain profit, they have lost their major source of income, the cemetery goers.

Navarro is asking the city government to help the flower vendors, too, who counted on this Kalag-kalag season to earn, but have failed to do so because of the restrictions.

“Tabangan unta mi, bisag usa ka adlaw lang nila ablihan and menteryo. (They should help us, if only for one day they could open the cemetery,” said Navarro.

Enesola is urging the public to buy their flowers even if these may not be for the cemeteries.

“Bisag para sa inyong balay lang, unta mopalit mo. (Even if only for your homes, please buy our flowers),” she added. /dbs