Pope Francis to Filipinos: Joy in Christian Gospel is evident 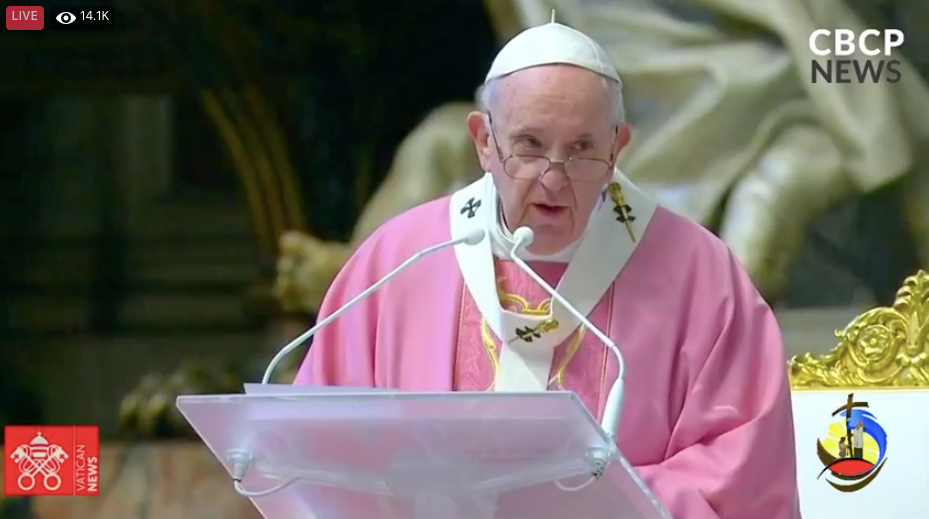 Pope Francis on March 14, 2021 celebrates the Holy Mass in celebration of the 500 Years of Christianity in the Philippines. | Photo from CBCP’s Live Video

Pope Francis presided the Holy Mass in celebration of the quincentenary arrival of Christianity in the Philippines from St. Peter’s Basilica in Rome.

A limited number of members of the Filipino community in Rome were allowed to attend the Mass which began with a small procession in honor of Señor Sto. Niño.

The Mass opened with devotees and the choir singing to Gozoz de Sto. Niño de Cebu, presently known as Batobalani sa Gugma, in honor of the Holy Child.

The statue of Señor Sto. Niño, now enshrined in Basilica Minore del Sto. Niño de Cebu in downtown Cebu City, was the gift that Portuguese explorer Ferdinand Magellan presented to Queen Juana in his arrival in Cebu in 1521.

Pope Francis, speaking in Italian, expressed gratitude to all Catholic Filipinos for spreading the Gospel not only in the country but also in the entire world.

“500 years have passed since the Christian message first arrived in the Philippines. You received the joy of the Gospel. And this joy is evident in your people. We see it in your eyes, on your faces, in your songs, and in your prayers,” said Pope Francis.

“I want to thank you for the joy you bring to the whole world and to the Christian communities,” he added.

“I also want you to persevere in the work of evangelization, which is not the same as proselytism,” he said.

The year-long activities in line with the 500 Years of Christianity in the Philippines will kick off this Easter Sunday, April 4.

In Cebu, the Roman Catholic Archdiocese is expected to lead the commemoration of the first baptism to be held near Magellan’s Shrine in Cebu City.

RELATED STORY: Cebuano songs to be featured in Papal Mass for 500YOC